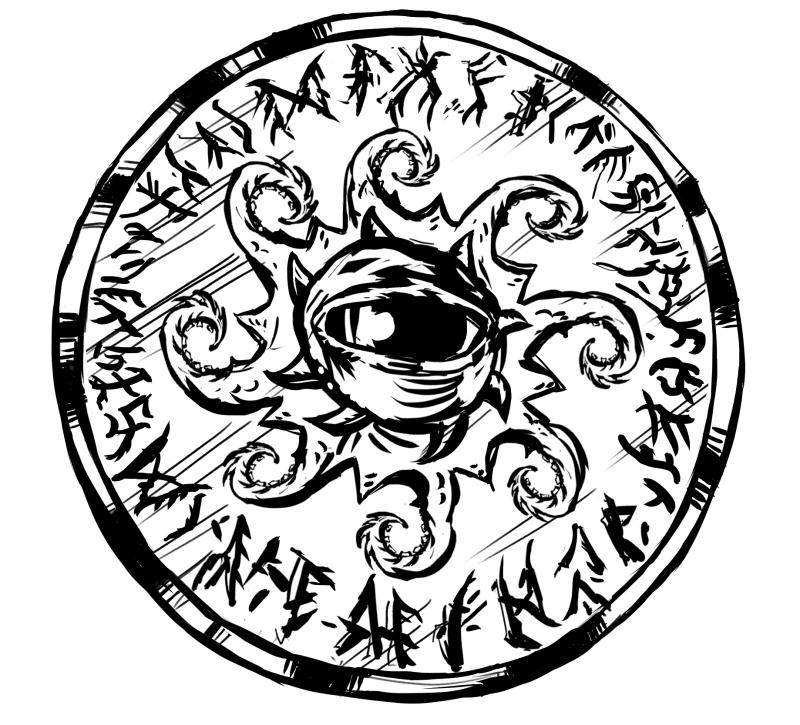 CE demon lord of Deformity, the Sea and Sea Monsters

Epithets: Shadow in the Sea

Symbol: A gold disk inscribed with sinister runes around an open octopus eye

Worshippers: Dagon is worshipped primarily by boggard, heretical sahuagin and skum, marsh giants and degenerate or insane coastal dwellers. Most of his worshippers are horribly misshapen, deformed creatures that interbreed with strange aquatic creatures. Others are warped by Dagon’s own terrible influence and have the deformed template.

Teachings: Dagon’s holy places are always in or near the sea. Therein his worshippers engage in strange and abhorrent practices and often also venerate the Great Old Ones. Followers of Cthulhu and Dagon are often allied.

Holy Texts: Dagon’s worshippers follow no set, laid down doctrine. Dagon cares not exactly how his aberrant followers worship him as long as they worship him.

Deformed creatures have been horribly altered by their proximity to a place of power dedicated to the demon lord of deformity, Dagon. These blasphemous aberrations often worship the Shadow in the Sea, but creatures can also unknowingly acquire this template.

“Deformed” is an inherited or acquired template that can be added to any living corporeal creature (referred to hereafter as the base creature). A deformed creature retains all the base creature’s statistics and special abilities except as noted below.

CR: Same as the base creature.

Type: The base creature gains the augmented subtype.

AC: The base creature’s natural armour increase by +1.

Special Qualities and Abilities: A deformed creature rolls twice on the table below. Ignore duplicate rolls or results that makes no sense given the base creature’s characteristics.

0 Comments Share Tweet Print Email
Categories: Gloamhold, Raging Swan Press
Disclosure of Material Connection: Some of the links in the post above are “affiliate links.” This means if you click on the link and purchase the item, I will receive an affiliate commission. Regardless, I only recommend products or services I use personally and believe will add value to my readers. I am disclosing this in accordance with the Federal Trade Commission’s 16 CFR, Part 255: “Guides Concerning the Use of Endorsements and Testimonials in Advertising.”