Way back in 1991, I sent an adventure proposal into Dungeon magazine. The editors, Barbara Young and Wolfgang Baur, liked my outline and asked me to send in the full manuscript. Luckily, they liked that too and my adventure, A Blight on the Land, set in Tethyr in the Forgotten Realms, was published in Dungeon #38. 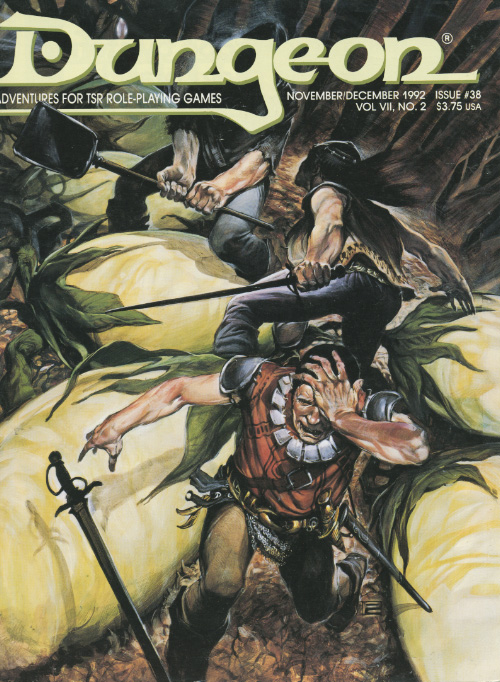 Encouraged by this success, I sent in a few more adventure proposals in the following months but none were accepted. Disheartened, I gave up and instead concentrated on writing stuff for the campaigns I was running.

Fast forward sixteen years to 2007 and Wolfgang Baur had started a new project called Open Design. A small number of “patrons” would sign up for an exclusive adventure written by Wolfgang with these patrons inputting into the creative process through online discussion and polls. I took part in several of these projects and learned a lot about what makes a good fantasy RPG adventure. The discussions were interesting and fun, and I was pleased to see a few little things I’d come up with included in the finished adventures.

Then, an opportunity arose to convert some monsters and NPCs to 4th Edition D&D as part of one of these projects – I volunteered, wrote the monsters up, and sent them off to Wolfgang. I must have done a decent job on them because he asked me to write a chapter of the Iron Gazetteer, my first paid gig since Dungeon back in 1991! Better still, this project led on to me pitching and then co-writing the much larger Midgard Bestiary for 4th Edition,  a 114 page monster sourcebook, which I helped to market via Kickstarter in 2012.

I was also a regular reader of Creighton’s blog so when he wrote about needing freelancers to write for Raging Swan’s So What line, I told him I was available. I ended up writing five short supplements for the series, including books on treasure (So What’s That Shiny Thing, Anyway?), armour, weapons, and two on taverns which were well received by gamers and reviewers.

Spurred on by my freelance success, I decided to tackle a much bigger project. I would write up the city campaign setting I’d been running games in for the last five years and publish it as a professionally produced sourcebook suitable for all editions of D&D and Pathfinder.

I got some great advice from Creighton, Wolfgang, and a few other small publishers in the industry, and started writing. And writing. And writing. 93,000 words later, I had a finished first draft. After many revisions and a lot of brilliant editing by my wife Kate, the text was ready for layout, proofreading and publication. I commissioned three talented artists to do the cover and the interior art, and ENnie winner Jonathan Roberts to draw a gorgeous map of the city.

Parsantium: City at the Crossroads was published in February this year; it has received some great reviews and positive feedback, and has sold well beyond my initial expectations.

None of this would have happened if I hadn’t persevered with my writing once I’d got going again after my sixteen year hiatus. I’ll leave you with a few personal recommendations for anyone reading this who would like to get started in RPG freelancing:

Richard Green has been playing D&D since 1980, running the game in all four (now five!) editions, as well as plenty of other RPGs. He is currently running a regular D&D campaign set in the city and wider world of Parsantium, his own creation, which he has published as a sourcebook for all editions of D&D and Pathfinder.

Richard lives in London with his wife Kate and two cats. When he’s not playing and writing roleplaying stuff, he likes to watch Crystal Palace FC try to win football matches.
You can read more about Parsantium: City at the Crossroads at Parsantium.com, and you can follow Richard on Twitter where he is @richgreen01.

1 Comment Share Tweet Print Email
Categories: Freelance Advice, Gaming Advice
Disclosure of Material Connection: Some of the links in the post above are “affiliate links.” This means if you click on the link and purchase the item, I will receive an affiliate commission. Regardless, I only recommend products or services I use personally and believe will add value to my readers. I am disclosing this in accordance with the Federal Trade Commission’s 16 CFR, Part 255: “Guides Concerning the Use of Endorsements and Testimonials in Advertising.”

One thought on “From the Realms to Parsantium”