Dressing, detail and flavour can elevate your game. Role-playing is a game of the imagination and anything you as a GM can do to help your players dive into your campaign world and suspend their disbelief is a good thing. 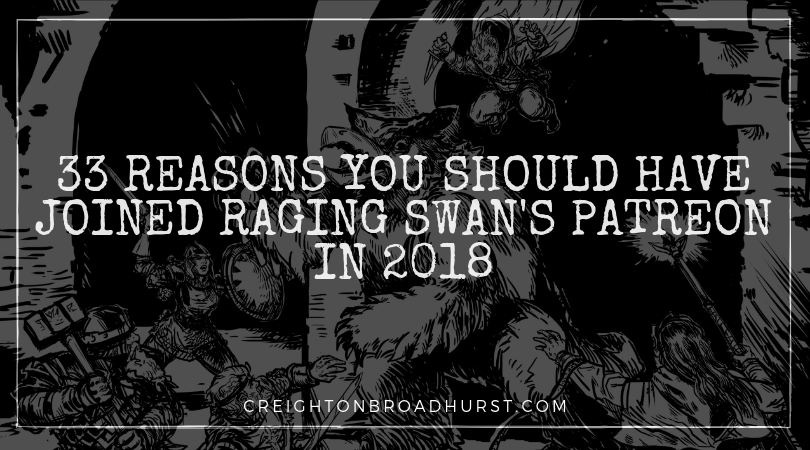 That’s why every month, patrons supporting Raging Swan Press at the $2 and up level get a free copy of that month’s 20 Things instalment and both monthly instalments in the Monstrous Lairs line.

In 2018, patrons who supported us for the whole year got free copies of:

But more importantly than the money saved, these books helped busy GMs like you save time and bring the dungeons, towns, NPCs, wilderness treks and more in their campaign to life with virtually no effort.

So if you’d like to save your precious time and add detail and flavour to your game with free GM’s Resources from Raging Swan Press all you have to do is sign up to our Patreon campaign at the $2 or up level. Every month, you’ll get three free supplements from us as a thank you for your epic support.

I want your campaign to be as awesome as possible, and I’d love to start sending you your free GM’s Resources. To sign up to Raging Swan Press’s Patreon campaign, head on over to our Patreon page.

2 Comments Share Tweet Print Email
Category: Raging Swan Press
Disclosure of Material Connection: Some of the links in the post above are “affiliate links.” This means if you click on the link and purchase the item, I will receive an affiliate commission. Regardless, I only recommend products or services I use personally and believe will add value to my readers. I am disclosing this in accordance with the Federal Trade Commission’s 16 CFR, Part 255: “Guides Concerning the Use of Endorsements and Testimonials in Advertising.”