At the end of last session, our heroes were in the midst of a vicious skirmish with a pack of goblins lurking in a ruined house deep in Underbridge.

Narfu, lurking in the rafters, hurled a flask of alchemist’s fire down on the goblins, but it missed. He followed this up moment later with a flask of acid that struck one of the goblins in the face. The goblin screamed and dropped his heavy crossbow before pawing pathetically at his burnt face. Its partner, in retaliation, promptly shot Narfu in the chest. The unfortunate monk staggered back and lost his balance. Only his swift reflexes saved him from a horrible fall, but as it was he was left with a crossbow bolt in his chest, hanging by one hand on a rafter high above a pit filled with sewage.

Narfu’s friends sprung into action. Nylond and Aq had finally smashed a hole in the wall and surged into the room. As they did, Narfu tried to pull himself up, but again slipped and tumbled into the sewage. The fall proved too much for the monk and he sank (literally and figuratively) into unconsciousness. Seeing this, Nylond jumped into the sewer, but himself slipped and went under. Meanwhile Aq battled—and eventually slew— the remaining goblin while Tristram hacked his way into another room. 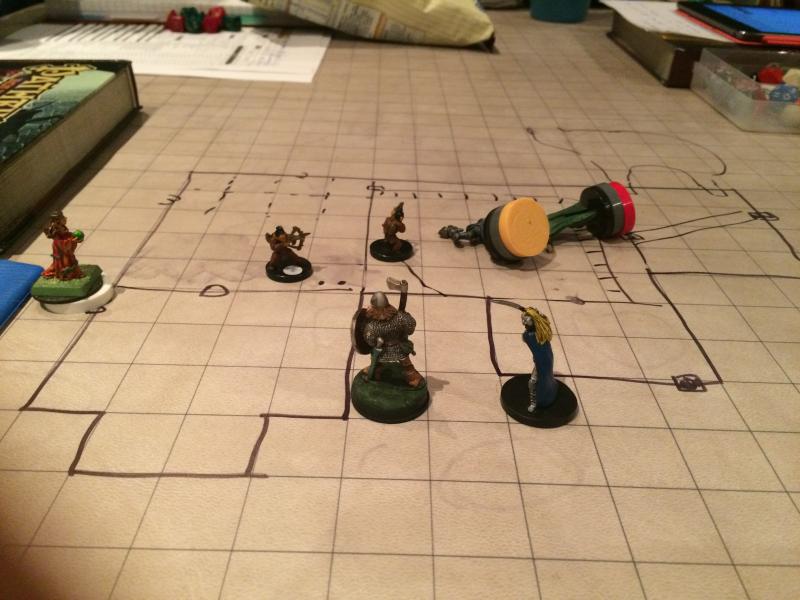 Moments later, the goblin was dead and Narfu was brought round by his dwarven companion’s divine magic.

At this juncture, Nylond decided Fenster had lied to them and that Natalya was not actually in the house. He stomped off to have “a word” with the odious, disease-riddled fellow. Meanwhile, his companions decided to continue their explorations. They discovered a stone chimney in one room with a ladder running up to the attic. Tristham bravely led the way up the ladder, and immediately got into a vicious fight with a deranged woman lurking above. It turned out this was Natalya herself, but she seemed mad. As Narfu moved to help his fellow he spotted a large snake with a goblin’s head lurking behind the ladder. After the two eyed each other up for a few moments, another fight broke out just as Tristram discovered Natalya had a few remaining goblin servants with her.

Luckily for Tristham, Aq proved a deadly archer and in the ensuing duel slew both goblins. Tristham tried to valiantly fight Natalya, but she was a skilled warrior and he quickly fell. Narfu also fell again, fighting the strange goblin-headed snake. By now, everyone except Kara was injured and covered in excrement. Thus after slaying the snake, Aq tried to negotiate with Natalya, but she demanded he swear loyalty to her and forsake all others. This the paladin of Heironeous could not do and again battle was joined. However, by now Natalya was injured and Aq managed to overcome her, but not before she wreathed him in incandescent flames (that turned out to be illusionary, but which gave Kara a horrific shock as she saw her brother seemingly immolated!) 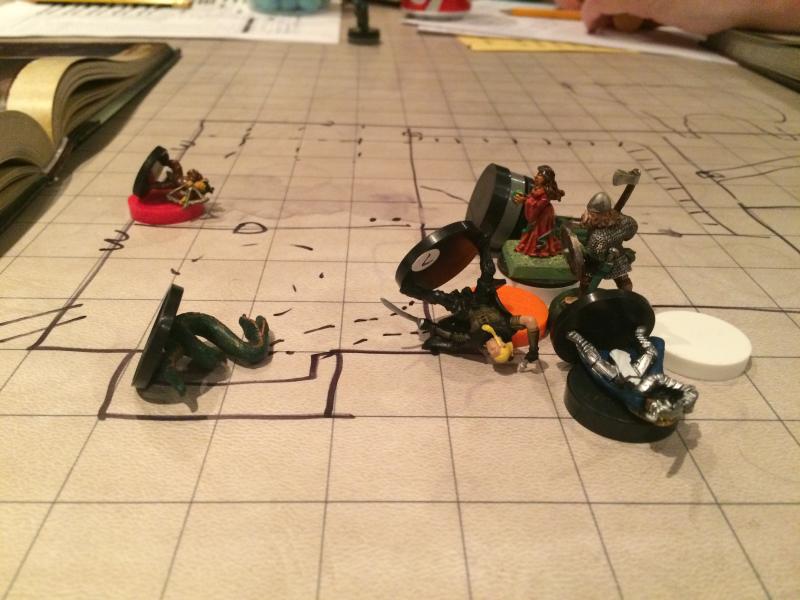 Finally, victory was won although at a great cost—Narfu and Tristram were unconscious while Nylond was somewhere in Underbridge. (It later transpired the dwarf had found Fenster and had got into an inconclusive fight with him—and had barely escaped with his life!)

Now Aq and Kara had a problem: they had two unconscious comrades and an unconscious Natalya…and no healing! Aq bribed a street urchin to go for help at  Hiedmarch Manor and the two adventurers settled into wait. While they waited Kara examined Natalya and discovered she carried something radiating a magical aura of overwhelming power. Perhaps prudently Kara avoided touching it and the two were discussing this development when two thugs led by a woman wearing fine armour arrived. The woman demanded Natayla and our heroes demurred.

Angry, the woman ordered her thugs to attack, but now Kara’s magic saved the day! Her most powerful magics created demons in the thugs’ minds and both fled in terror before these horrors of the netherworld. Undaunted, the woman attacked and almost killed Kara! However, Aq—once again strong in the faith off the Invincible One—dealt the woman two terrific blows and she too also fled.

Hours later, both Nylond had returned to his companions and a rescue party led by Shel herself had reached Aq and Kara. With their numbers now bolstered considerably, the party return to Hiedmarch manor to rest, heal their many injuries and to reflect on all they had recovered.

One thought on “Shattered Star #3: A Desperate Battle”