This elegantly-carved hollow golden horn is slightly warm to the touch and radiates a barely perceptible glow. 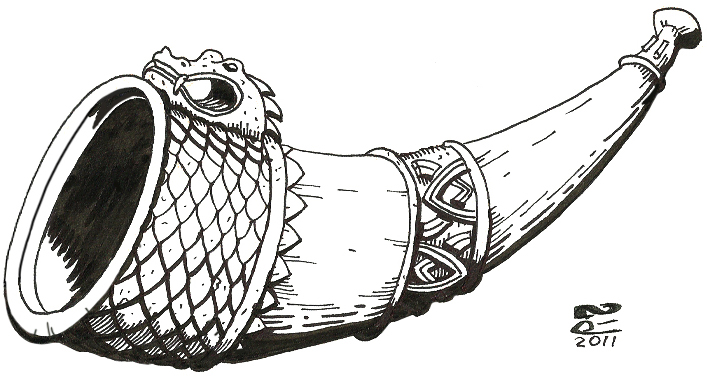 Grail of Ashenyar by Ryan Sumo

Powers The Grail of Ashenyar has the following powers:

Blessing of the Virtuous (1/month) When bathed in the light of the full moon and blessed with a prayer spell cast in a consecrated area by a good-aligned cleric, the Grail of Ashenyar is imbued with protective magics. Thereafter, the possessor can cause the grail to fill with a thick, effervescent sweet-tasting golden liquid. Up to 13 creatures can drink from the grail and those doing so are protected as if they had consumed a heroes’ feast. Once conjured, this liquid cannot be again called forth until the grail is recharged by completing the above ritual under a new full moon.

Virtuous Reborn (1/year) The grail’s greatest power is the ability to banish death itself. Once per year, it can be used to return a slain creature to life. To do so, the possessor must sprinkle 5,000 gp worth of diamond dust into the grail and pray to the powers of goodness and light. Doing so imbues the dust with the power to restore life to the fallen. A corpse covered in the dust is affected as if by a raise dead spell. To restore this power to the grail, it must be bathed in holy water within a consecrated area by the light of the first full moon of the year.

Drawback Powerful champions of evil – demons, devils and chromatic dragons – can sense the Grail when within 100 miles of the relic. The creature senses the direction in which the Grail lies (as if it could visualise it while affected by a locate object spell), but does not know its exact location.

I’ve priced this item as a staff as it has broadly similar style of powers. However, I have applied an overall 30% discount because of the restriction of use.