Once the home of a mighty conjurer, this ruined tower acts as a magnet for goblins, bandits and other foul things that creep forth from the nearby caverns of the Twisted Gorge. 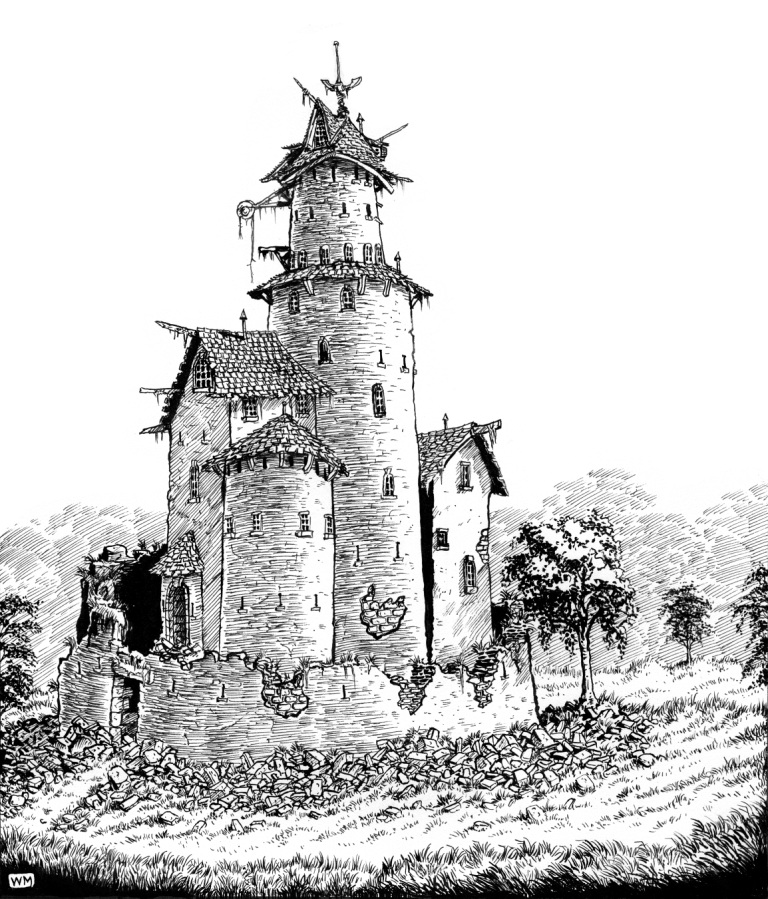 This impressive ruin stands upon the crown of a hill that struggles above the Tangled Wood’s dense canopy. Set astride the headwaters of a minor tributary of the Arisum, several faint game trails lead to the ruin’s general vicinity.

Arius was a mighty conjurer of little morality, skilled in binding otherworldly creatures to his service. Eighty years ago, a ritual went terribly wrong when he lost control of that which he had summoned. In the ensuing battle, his tower was devastated and at the height of the conflagration Arius disappeared. Only a single apprentice survived to reach Wolverton to tell of the disaster. For three days, an eldritch glow marked the night sky above the tower.

Since then, bandits, goblins and other foul creatures sporadically infest or inhabit the tower and the tunnels below fighting among themselves for dominance. Several times, black-hearted wizards have claimed the ruins so that they might steal Arius’ impressive cache of magical lore. Most linger for a while, before leaving empty-handed.

On occasion, the local lords have sought to wrest control of the tower from such groups, but attrition of the garrison and the difficulty of keeping such a group supplied stymies such efforts. Neophyte adventurers often explore Arius’ Watchtower before moving onto the Twisted Gorge’s greater challenges.

As well as the above ground portions and upper dungeons of the ruins, rumours persist of deep cellars dug below the place. There Arius is said to have performed his most esoteric and dangerous spells and to have bound a number of powerful otherwordly creatures in arcane prisons that yet hold their charges secure. The entrance to such domain – if indeed it exists – remains unknown.

It is a matter of some conjecture among the sages and wizards dwelling in Wolverton that Arius built his watchtower over the ruins of an ancient site of power. Sages point to the presence of several huge, ancient stones replete with faded, time-worn carvings seemingly of elder artifice incorporated into the tower’s lower walls as proof of this fact.

3 Comments Share Tweet Print Email
Categories: Campaign Components, Raging Swan Press
Disclosure of Material Connection: Some of the links in the post above are “affiliate links.” This means if you click on the link and purchase the item, I will receive an affiliate commission. Regardless, I only recommend products or services I use personally and believe will add value to my readers. I am disclosing this in accordance with the Federal Trade Commission’s 16 CFR, Part 255: “Guides Concerning the Use of Endorsements and Testimonials in Advertising.”