At the end of last session we left the party resting in the forest after a harrowing – and near fatal – exploration of the lower portions of Vesicwyr’s lair.

The party rested overnight, and the next morning Gorinar and Tzaran used much of their magic to restore some of Tzaran’s depleted strength. Talk inevitably turned to what to do next. After a discussion that lasted some time, the party decided to let the pirates and Vesicwyr fight it out; their plan being to then slaughter whichever side emerged victorious (but hopefully much weakened).

As they discussed their plan, several of the party heard the sound of voices approaching. Quickly taking cover, they spotted a half-dozen pirates moving through the trees – apparently following the party’s trail. Quickly, the heroes prepared an ambush. When the pirates drew close enough, the party struck with devastating speed and violence. In moments, half the pirates were dead or incapacitated (victims of a sleep spell cast by Ulmo). Of the survivors, one – badly injured – threw himself to his knees and tried to surrender while the two others fled. 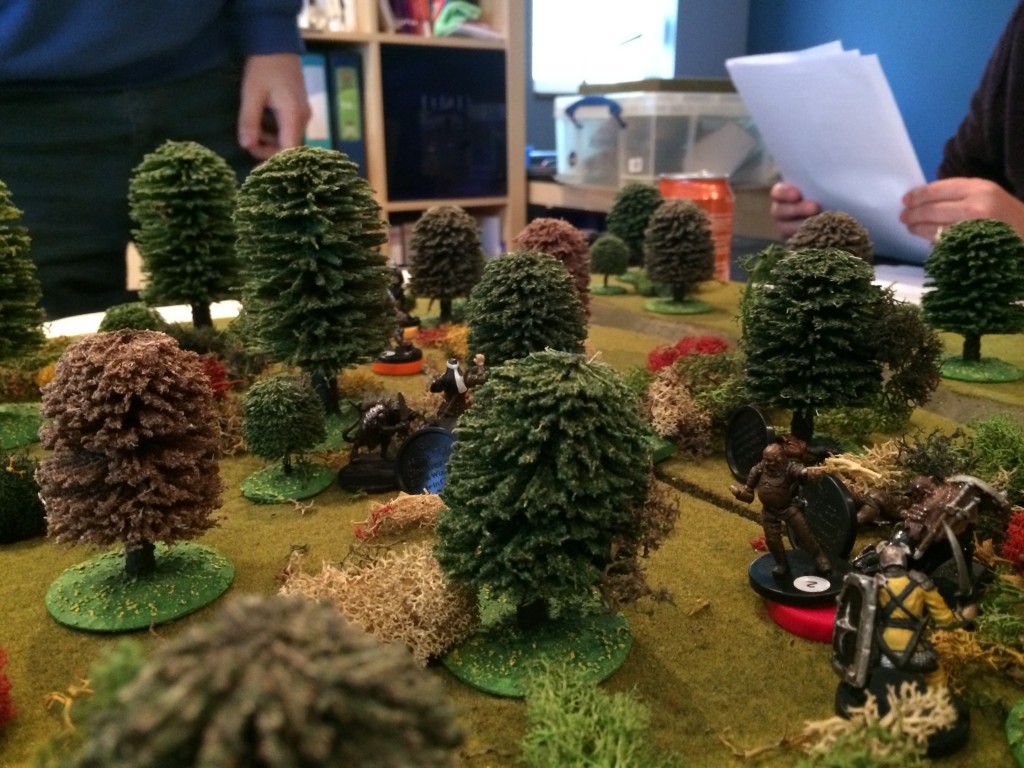 Krorz cut down the surrendering pirate and moments later Tzaran and Skink caught the others. With magical assistance from Gerald and Ulmo the final two pirates were slain before they could alert the main body of their army.

The party now had a prisoner. Once the pirate had come round, the party forced him to watch one of his slain fellows being fed to Tzaran’s huge snake companion. This had the desired effect of loosening the pirate’s tongue and he told the PCs everything he knew. It transpired that Yorn had long lusted after Vesicwyr’s treasure, but had not known the location of her lair. The party had (unwittingly) provided the relevant information when they fled Dekspoint and so Yorn had gathered together some of his followers and set off into the forest. Shortly thereafter the pirate managed to choke himself to death while attempting to escape. This surprisingly turn of events spawned an argument among the party as Gorinar suspected several of his friends of foul play.

In any event, thus apprised of impending events, the party again tried to get the name of Vesicwyr’s lord by using the seeing stone. Again, the dragon was very reluctant to provide the name and several times suggested the party did not really want to know and that her lord’s identity was so terrifying the party would do best if they forgot the matter and fled. Of course, they refused and the conversation shortly thereafter ended.

Keen to take advantage of the impending the battle, the party broke camp and snuck back toward the pirate army. By now, the pirates were ensconced in a camp before the mesa. That night, as Gorinar performed the ritual to activate the Grail of Ashenyar, battle was joined in the forest. Although numerous, the pirates were no match for Vesicwyr. Seemingly able to move through the dense undergrowth as will, she repeatedly pounced on the pirates using her breath weapon and flight to great advantage. Hearing the sounds of battle some of the party crept closer to observe. It quickly became obvious that Vesicwyr’s prowess was greater than her size would suggest. Before they finally broke and fled, scores of pirates died – melted by her acidic breath. When the army final broke and ran, most did so heedlessly. Only Yorn and his ogre bodyguards retreated in good order.

When the massacre was over – and Vesicwyr had returned to her lair – Gerald, Skink and Krorz emerged from their hiding place to search the battlefield. They found scores of melted bodies and much destroyed equipment Among the ruin, they recovered several lengths of rope and some food, but found little of value.

The next morning, the party again contacted Vesicwyr via the seeing stone to see if the dragon had undergone a change of heart. While speaking with her they noticed she was practically uninjured after her night’s exertions and thus decided she was indeed more powerful than she seemed. Again they asked her for the name of her lord. She again refused before making a counter offer: if the party would kill the treacherous Yorn for her, she would reveal the name of her lord. After a short debate, the party agreed. (Sir Eril only agreeing if the party gave him all the glory of slaying the pirate leader). Although this would mean they were doing the bidding of an evil dragon, Gerald in particular saw that it was for the greater good; once the name of Ratik’s shadowy enemy was known surely the party could work towards slaying said personage. The pact seal, the party returned to Dekspoint and sneaked into the city via the escape tunnel they’d previously found in the Dragon Cult’s temple.

Searching the temple, they discovered it all but abandoned. Secure (for the moment) they plotted their assault on Yorn’s palace…

One thought on “Borderland of Adventure #75: The Greater Good”