At the end of the last session, we left our heroes standing triumphantly in Xul-Jarak’s throne room over the corpses of many slain orc warriors. However, the orc’s critically injured leader, Daazlag, had eluded them by cloaking himself in invisibility.

None of the party seemed keen to search the courtyard for him and so they checked the nearby rooms. While they did that, Oreal searched for Daazlag’s tracks. As he, did heard a moan and a thud from the courtyard. Surmising that the orc had finally succumbed to his wounds, several party members dashed out to locate his corpse. This they did, by hurling dust about, and dragged him back inside.

This discovery promoted rejoicing among the party and a general round of looting. The bodies of the fallen were looted first – both the cleric and Daazlag were found to have magical armour and several scrolls were also recovered. However, the orc’s spear generated the most interest. Vilimzair studied it with a detect magic and proclaimed it to be the Spear of the North – a weapon thought lost in the wrack and ruin of the Bone March over 15 years ago. Hemgor claimed the item, sensing perhaps that his destiny lurked within its shaft.

The party searched the throne, but found nothing They did see, however, a single red gem glittering in the eye sockets of a gigantic orc warrior statue. Tzaran retrieved the item by having his ape lift him up to reach the orc’s head. However, as he touched the gem a flare of black light surrounded him for a moment before he dropped the gem into a blanket previously placed on the floor against this very eventuality. Tzaran seemed unharmed by the event, but it became apparent as the searching and looting continued that he didn’t seem right; that he seemed slightly befuddled.

The party – not encountering any more orcs – searched the surrounding rooms discovering living quarters, a kitchen, larder and more. In the room occupied by the two humans, they found a great store of treasure – including sacks of golden coins minted in North Province and a small jewellery box holding a golden band of elven artifice. They also found many burnt papers, one of which seemed of particular interest: 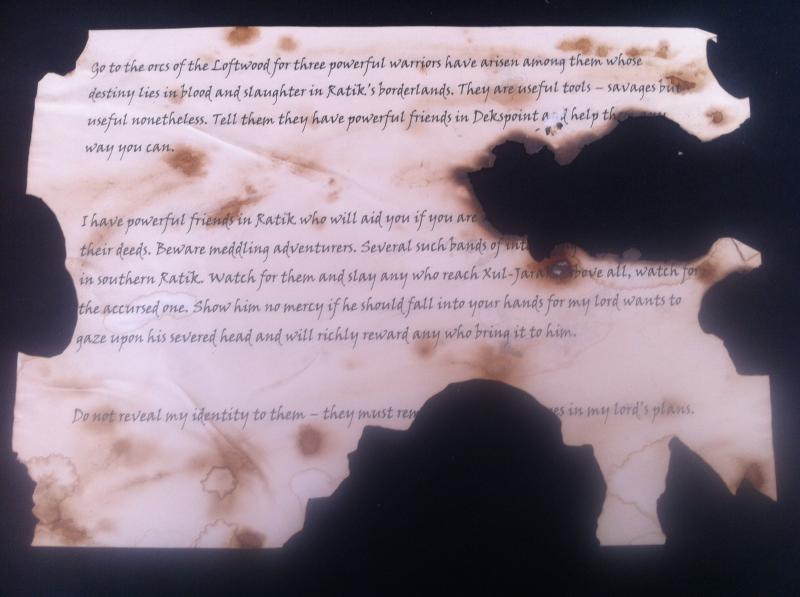 At this point the party decided to retire to their woodland camp as they were very low on resources. They left the citadel without seeing any more orcs – the party theorising that the survivors had fled when they realised their leader had been slain.

The party rested for two days to regain their strength. During this time they argued about what to do next. Hemgor and Oreal were keen to try and hold Xul-Jarak for Ratik while the others wanted to damage the fortress as much as possible before retreating to the safety of Ratik. They also discovered during this time that the elven ring was in fact a ring of evasion! All coveted it, but Tzaran won the resultant game of chance and claimed the ring for his own.

Returning to Xul-Jarak they discovered an abandoned fortress – signs of hasty departure evident in several of the chambers (particularly in the gatehouse).

They discovered a similar story in the four dungeon levels below the fortress. Everywhere were the signs of orc infestation, but no sign of the actual orcs themselves. On the lower level, they surprised and slew the surviving forest drake and recovered Oreal’s companions’ remains as well as some more treasure, although during this time Tzaran complained of feeling ill.

After more discussion, it was decided to burn Xul-Jarak’s gates so that the orcs could not easily re-occupy the fortress.This was accomplished relatively easily. This last task done, the party decided to return to Ratik, there to see how the war had gone in their absence…

2 Comments Share Tweet Print Email
Category: Borderland of Adventure
Disclosure of Material Connection: Some of the links in the post above are “affiliate links.” This means if you click on the link and purchase the item, I will receive an affiliate commission. Regardless, I only recommend products or services I use personally and believe will add value to my readers. I am disclosing this in accordance with the Federal Trade Commission’s 16 CFR, Part 255: “Guides Concerning the Use of Endorsements and Testimonials in Advertising.”

2 thoughts on “Borderland of Adventure #37: Victory!”