At the end of last session we left the party standing amid the carnage of their last epic battle.

As they began to heal their many wounds and think about looting the dead, Tzaran moved up to the double doors leading outside to keep watch. The distant sound of snarling and yipping reached his ears and he soon realised a pack of hyenas lurked in the other tower. After a few more minutes, the yipping sound of many gnolll voices were added to the sound. The doors of the other tower then opened to reveal a mixed pack of gnolls and hyenas led by a gigantic, green-hued gnoll clad in outlandish armour and wielding a strangely curved sword Krorz identified as a katana similar to the one once wielded by his slain companion Kemmo.

As the gnolls gathered in the doorway, Tzaran shouted a warning to his companions and instead of retreating they once again formed up for battle. It was to be a fatal decision. Gathered in the doorway, they made final preparations for battle as the huge gnoll–accompanied by a gigantic hyena–stalked across the bridge. When it drew closer, it breathed a cloud of stinging acid onto the party before crashing into their front rank. Their defences held, however, and the gnoll could not batter down either Dregak or Montigue.In turn, however, the party seemed unable to penetrate the gnoll’s defences and the situation worsened when the rest of the gnolls raced across the bridge to join their leader. At the back of the party, Gorinar hurled magical fire into the enemy’s ranks while Ulmo lurked ready if need be to summon a huge earth elemental using his most potent remaining magic.

As the fighting intensified, Tzaran distracted the gnoll champion by repeatedly dumping magically created water into his eyes, spoiling several attacks that would have seriously injured Dregak. Eventually, the embattled dwarf hit on an idea. Slowly and surely he drove the gnoll champion back until he managed to push him off the bridge into the waters below. With their champion seemingly slain (and definitely out of the fight) the gnolls redoubled their efforts but soon they were either dead, dying, pushed into the water below or retreating back along the bridge.

In the shadows of the other tower, Montigue spotted another two gnolls. One was the badly injured warrior who escaped the party at the end of the last battle while the other was an obvious spellcaster. Seeing this, he raced across the bridge–desperate to close the distance before the gnoll could start casting powerful magics. However, the few surviving gnoll warriors slowed his–and Dregak’s–approach and both were struck repeatedly by magic missiles. Once only one warrior remained to stop the party, the gnoll unleashed a lightning bolt that injured many of the party (and knocking Montigue unconscious).

Still the heroes were undeterred and surged across the bridge. But one warrior waited to hold them at bay, but he seriously injured Dregak knocking the dwarf unconscious. By this time, most of the party were on the bridge (Gorinar having healed Montigue) and the remaining gnolls were hard pressed. Ulmo chose this moment to summon his large earth elemental and the battle seemed won. However, the gnoll sorcerer had a few last tricks up his sleeve. Using a scroll of fly he took to the air and once safe unleashed another lighting bolt. This last bolt badly injured the elemental, but sadly slew the unconscious Dregak and the last gnoll warrior. After this, the gnoll–safe in the sky–switched to hurling bolts of fire from a magical wand. Eventually, he destroyed the elemental, but then Ulmo–desperate at the last–fooled the sorcerer into thinking he was summoning an even more powerful air elemental. Combining this with a ghost sound spooked the sorcerer. When Gorinar added a minor summoned air elemental to the mix, the sorcerer fled.

With heavy hearts, the party retrieved the body of their fallen companion . As they did so, Krorz discovered a pouch amid the carnage. Many of the scrolls within were a sodden mass – stained by water and blood and completely unreadable. Once however–written in Draconic–had survived. 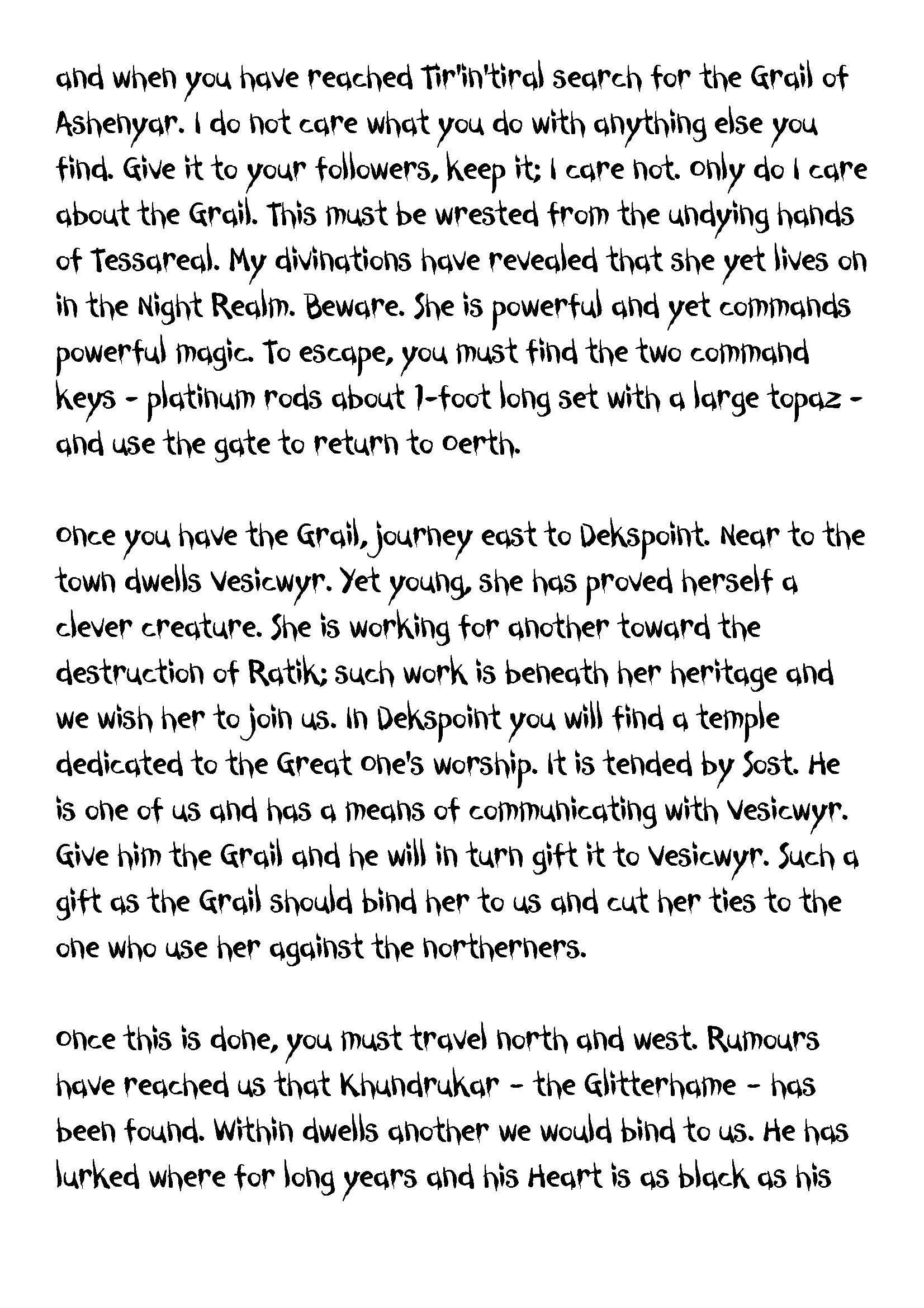 With this new intelligence in hand, and hoping nothing else lurked nearby to assail them, they pondered where to retreat to for a desperately needed rest…

0 Comments Share Tweet Print Email
Category: Gaming Advice
Disclosure of Material Connection: Some of the links in the post above are “affiliate links.” This means if you click on the link and purchase the item, I will receive an affiliate commission. Regardless, I only recommend products or services I use personally and believe will add value to my readers. I am disclosing this in accordance with the Federal Trade Commission’s 16 CFR, Part 255: “Guides Concerning the Use of Endorsements and Testimonials in Advertising.”