The Orestone is a forlorn, windswept and wave-lashed bare chunk of rock jutting out of the sea roughly 500 feet from shore. Cliffs encompass three of its sides with the fourth comprising a series of high rock shelves rising out of the surrounding, treacherous waters. 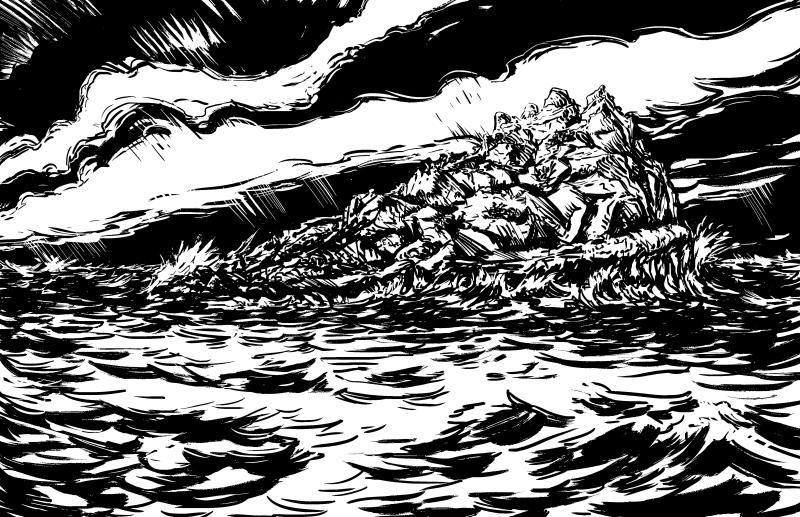 Many vessels have come to grief on the Orestone; their wrecks litter the surrounding sea floor. When a ship strikes the Orestone, every boat-owning peasant descends on the location to both assist the unfortunate mariners and to recover as much cargo as possible.

Atop the Orestone’s highest point stands a pile of jumbled rounded boulders. Worn smooth by the wind and rain, the stones conceal a small sinkhole that penetrates deep into the living rock before intersecting a large, partially flooded tidal cavern. Here faded alien carvings cover many of the walls. Several passages tunnel deeper into the rock; most are little more than dead-ends, inundated by the sea at high tide. One, however, plummets ever deeper over a series of treacherous escarpments until far below the sea bed it follows a circuitous route northeast. Eventually, the passage breaks into a partially flooded ancient mine several miles south east of Wolverton.

In ancient times, fell creatures lurked within the caverns, creeping forth when a gibbous moon hung in the sky and strong winds whipped the foaming sea into a frenzy to perform terrible, sanity-shattering, half-forgotten rites. Remnants of those folk – degenerate troglodytes – yet linger in the tunnels and still faithfully serve their aboleth master, Irfel-Thoth (LE advanced giant aboleth), among the squat, cyclopean ruins of the ancient troglodyte city of Kar-Loth.

Help your fellow gamers by adding a piece of dungeon dressing suitable for the Orestone into the comments below!

2 thoughts on “Campaign Components: The Orestone”