At the end of last session, we left the PCs lurking in Blasingdell after a sorrowful return to the town. With Kemmo dead, the party’s desire to return to the orc-infested halls of Khundrukar seemed strangely muted. After discussion, they decided instead to journey to Ratikhill and from there to Marner to take up the invitation of the Sword Lords.

Another adventurer, Hemgor (a powerful human warrior) was also heading into Ratik and offered to the join the party. Thus strengthened, but lacking Klara who had a pilgrimage of sorts to make, the party comprised:

The party left Blasingdell on the 21st of Planting. The first day’s journey was quiet and without incident until gathering storm clouds to the west over the Rakers began to move eastwards. In search of shelter, the party picked up its pace and soon came to the isolated monastery of Montelegron dedicated to Delleb the Oeridian lesser god of reason, study and intellect. The place had fallen on hard times having suffered a devastating fire 20 years ago that had destroyed the monastery’s famed library. The heroes were surprised to see a recently dug grave just outside the monastery gates dedicated to a Brother Abel who had died aged only 19. Belivar in particular thought this strange as he could see a graveyard through the gates.

Nevertheless, and with nowhere else to shelter, the party entered the place’s gates and quickly met a monk who took them to meet Abbot Anselm. The abbot, an elderly man, welcomed the PCs and gladly offered them (spartan) food and shelter for the night. He also explained, after polite questioning from the party, that brother Abel had committed suicide not three days ago and that his faith’s laws prohibited the burying of suicides within the walls. The party immediately (and somewhat prophetically) suspected foul play, but with nothing but suspicions did not pursue the matter further.

Although it was but late afternoon, dinner was soon to be served and the party had but an hour or so to stable their mounts and settle into their quarters. Perhaps wary from previous adventures, or simply picking up on the strange atmosphere of the place, the party decided to keep all their equipment in one room while they dined and to leave Belivar’s eidolon to guard it all.

Dinner was a sombre, quiet affair – the monks saying nothing while they ate. Afterwards, the party were invited to evening service and Belivar and Adoven attended while Hemgor and Krorz returned to their quarters (Krorz after making a quick circuit of the cloisters). There they waited for their companions to return, but were surprised by a hunchback, obviously retarded monk trying to sneak into their chambers. The hunchback – later identified as Gugliemon – was even more surprised when he encountered Belivar’s eidolon which forcibly stopped him looking through the party’s gear.

Shortly thereafter Belivar and Adoven returned to discover the hunchback trying to get past the eidolon which had thus far restrained itself from ripping the monk limb from limb. Moments later another monk, Edund, arrived and took the hunchback away after promising to punish him severely for his transgression.

Thus, as darkness fell over the monastery, the party settled in for the night. However, unsettled by the strange events thus far, they posted a guard and so it was that around midnight Krorz heard the strident ringing of the church bell. This seemed very out of place and so the party moved quickly to investigate. In the church, they discovered a horrific sight – the hunchback Gugliemon trussed up inside the bell, clearly dead. “Penance is done” was daubed in red liquid (later identified as holy oil) on the side of the bell. Blood and hair matted the inside of the bell and as the monks stood about muttering fearfully the abbot arrived.

As shaken as the rest, he nevertheless collected himself and asked to speak with the PCs in his office. There, he asked them to investigate the murder and find the guilty party. The party agreed and immediately began their investigations. Moving to the infirmary, Adoven investigated the body and found deep bruising and scratches about the hunchback’s neck indicating he had been strangled by someone with incredible strength. Next, they spoke with Edund in his cell, but the monk – clearly shocked and stunned by events – seemed to know nothing of value. Next they searched brother Adel’s cell for now they were convinced that his suicide – apparently by jumping from the scriptorium roof onto the cliffs – was in fact murder. Here they also spoke to Brother Malich, one of Abel’s closest friends, who told them he did not believe Abel committed suicide. While they were doing so, screams erupted from the kitchen (which was nearby) and the party rushed to investigate.

They found two monks fearfully investigating a large cauldron out of which poked a pair of sandled leg. “Penance is done” was daubed in red holy oil on the side of the cauldron. As they manoeuvred the body – now recognised as Brother Edund – onto the floor the rest of the monks arrived. Panic now seemed to almost grip the assembled Brothers and so the Abbot commanded them all into the church to pray while the party continued their investigations.

The party now commenced a detailed search of the monastery and decided to exhume the body of Brother Abel to see if he was also strangled. However, once they had found spades and proceeded outside they discovered that the grave was already open! Without bothering to investigate the coffin that yet lay within the grave they searched around the surrounding area and discovered a single set of tracks leading from the grave through a small break in the monastery’s walls.

Now convinced that Abel had risen from the grave and was killing the monks for some unfathomable purpose, the party decided to investigate what he was working on at the time of his death. In the scriptorium they discovered his work schedule and briefly read his final work – an unfinished history of Ratik. It seemed to hold no clues and so the party returned to the church to speak with the abbot in case he could shed any additional light on the proceedings.

Once inside – the monk had locked the outer doors to keep themselves safe – the party spoke with the abbot who took them and Brother Bernadinon (Abel’s direct superior) into the chapel to speak privately. As they did, a terrible figure emerged from behind the altar – Brother Abel risen as a revenant! The revenant screamed that Brother Bernadinon would now pay for his sins and moved to attack. The party leapt to his defence, but the revenant was faster. Opening its mouth, it screeched loudly. Such was the pain, frustration and hatred of the scream that the entire party cowered before its terror unable to act. Sadly for poor Belivar, he stood directly in front of Brother Bernadinon. The revenant advanced on the hapless halfling and smashed him to the ground before advancing to his prey. As the party cowered, the revenant began to slowly strangle Brother Bernadinon. Eventually, the heroes threw off the fear that gripped their very souls and rushed to aid Bernadinon who was now moments from death. Krorz hewed at the revenant mightily, badly injuring it while Hemgor stabbed it ineffectually with a spear. At the same time, Advoven, called forth the power of Moradin to save his dying friend.

However, their efforts were in vain. With a final twist of its hands, the revenant slew Bernadinon and cast his body aside. At that very moment, the revenant collapsed – now at peace – and the fight mercifully finished as quickly as it started. Shocked and stunned by the sudden violence the party gathered themselves and healed their injured – in particularly Belivar who himself had been dangerously close to death. 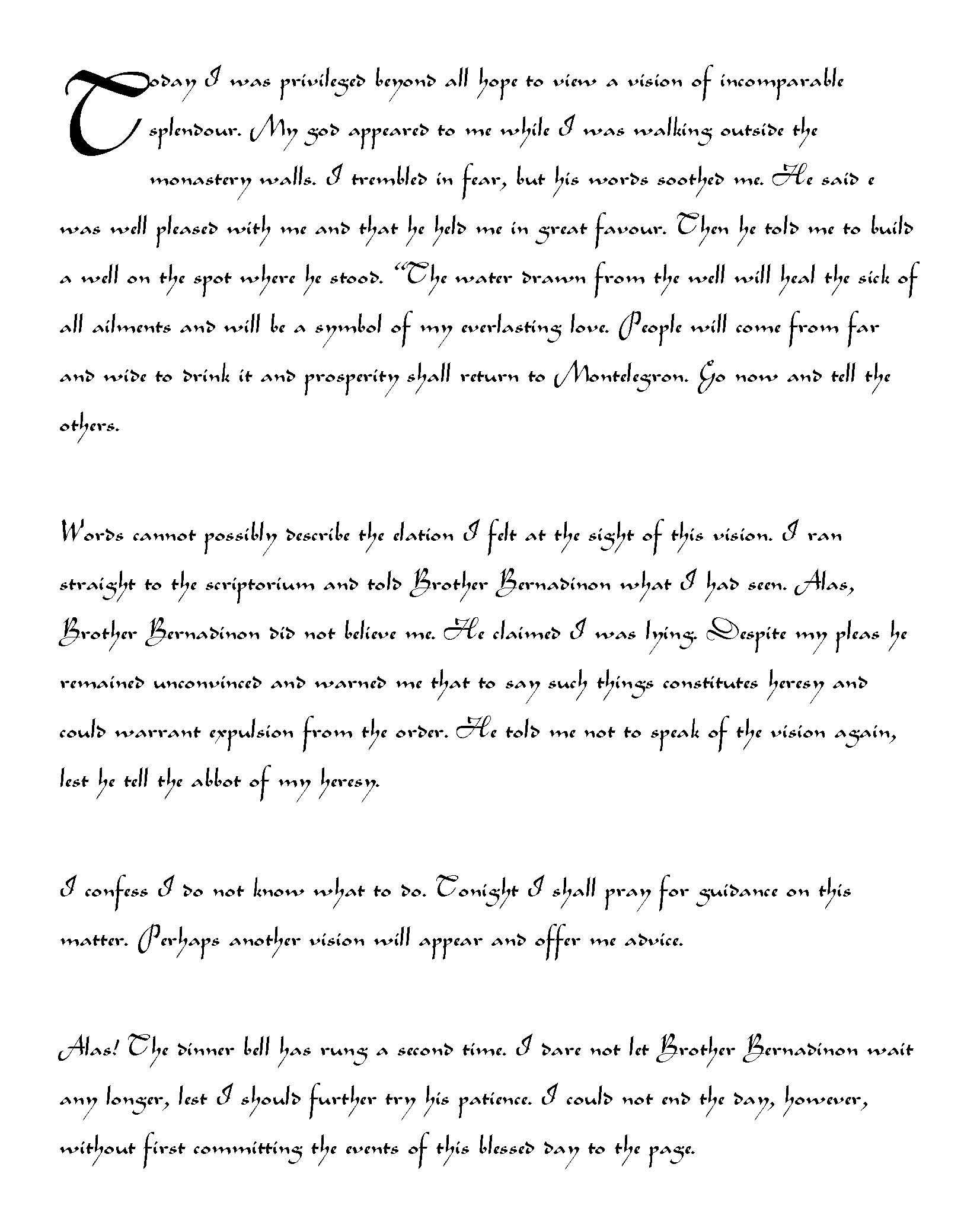 As the party puzzled over the diary they realised they still did not know why Guglimon, Edund and Bernadinon had slain Brother Abel…