Glowering amid dark rumours and terrible stories of desperate adventure, death, betrayal and glimmering treasures squat the unutterably ancient halls of Gloamhold. This crumbling, benighted, haunted dungeon complex of unknown, but undeniably vast, extent is buried deep within the grim and brooding spray-drenched headland of the Mottled Spire. It is a place of legends, madness and death. 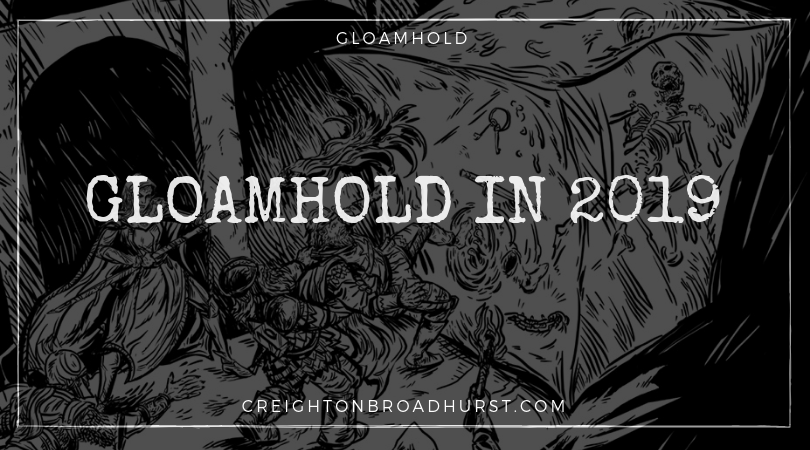 I’ve got big plans for Gloamhold and Ashlar in 2019. In 2018, we focused on tidying up and detailing Ashlar’s various villages, towns and cities. Languard got extensive treatment in City Backdrop: Languard and the Languard Locations series while the Villages of Ashlar presented all of the duchy’s villages in 5e, System Neutral and Pathfinder editions.

2018 also saw the start of my Adventures in Shadow campaign set in Ashlar and Gloamhold. At the time of writing, we’ve had 14 sessions of the campaign and are having a blast. We started at 1st-level and we are now using the Pathfinder slow advancement track so only a few of the PCs have reached the dizzy heights of 2nd-level. Thus far, the party have stayed in Languard and Greystone’s ruins. Therefore, to date, my development of Gloamhold has been confined to the city and the ruined village. The campaign is a sandbox game and so the players are keeping me on my toes (as they can’t seem to stick to their plans)! The campaign has so far spawned the following adventures and eventures (more about those later) set in Gloamhold:

And I’ve finished the first draft of:

The eagle-eyed among you will notice I’ve now made passing reference to two new Raging Swan Press product lines—Dungeon Backdrops and Eventures. What are they?

An eventure is akin to a normal adventure, but does not (normally) feature violence or physical challenges. Instead, an eventure focuses on the use of social skills and role-play to resolve the challenges, or events, therein. Most eventures take places in a settlement or on the road. Few occur in traditional adventure locales such as dungeons, ruined castles and so on.

Eventures are an excellent change of pace and can be used as filler between adventures or as situations in which PCs who have invested in social skills can shine. They are also perfect for players who enjoy role-playing.

I love adventures—dungeon crawls and all—but sometimes a change of pace is good, and that’s where Eventures come in. I’m particularly excited about this new line as it adds a whole new type of coolness to our line-up (and hopefully your campaign!)

You are a GM, but you are busy. You want to write your own modules, but you just don’t have the time. And you don’t want to use commercial modules. You want to make your campaign your own. That’s where the Dungeon Backdrop line comes in! Each Dungeon Backdrop presents a fully fleshed out and lovingly detailed self-contained dungeon ready for you to use as you see fit. Stock the dungeon with your own monsters (and—perhaps—their treasure), decide their back story and you are good to go.

This product line was born out of a comment a friend made a couple of years ago. I’ve been noodling about with the concept since then, but a message from one of Raging Swan Press’s patrons over on our Patreon campaign galvanised me into action. Essentially, my chum said he likes reading and using commercial modules, but he always extensively changes them to better fit his game. He went on to describe an adventure he used in which he basically changed all the occupants of the dungeon. As a GM, I often tweak adventures I’m playing and I suspect I’m not alone in that. Dungeon Backdrops give you the setting and let you concentrate on creating exciting situations and opponents.

Dungeon Backdrops are also a great way of detailing small sections of Gloamhold and the surrounds. Gloamhold itself is so large and vast that any attempt to map the entire place is doomed to failure. With Dungeon Backdrops, GMs can drop in small complexes—or parts of dungeon levels—where they need them.

The Duchy of Ashlar Campaign Guide

One book I really want to publish in 2019 is the Duchy of Ashlar Campaign Guide. Akin to the Gloamhold Campaign Guide or The Lonely Coast this likely won’t be a big book, but it would need to give an overview and include more about the duchy itself as opposed to its villages and towns. What calendar does the duchy use? What’s the weather like? What festivals do its folk celebrate? All these questions need answers!

The City of Languard

I’m also plotting a hardback City of Languard hardback book. One thing I struggle with in regards to this book, however, is how could you ever finish it? City Backdrop: Languard along with the Languard Locations line already comes to roughly 100 pages of material, but that barely scratches the city’s surface. As my campaign currently runs in the city, I suspect I have a lot of city-based design and development in my future!

2019 is going to be a big year for Ashlar and the Gloamhold megadungeon. Above, I’ve laid out some of my plans for Gloamhold in 2019, but what do you want to see in regards to Ashlar and Gloamhold? More adventures? More supplements? Let me know, in the comments below.

2 Comments Share Tweet Print Email
Categories: Borderland of Adventure, Creighton, Gloamhold
Disclosure of Material Connection: Some of the links in the post above are “affiliate links.” This means if you click on the link and purchase the item, I will receive an affiliate commission. Regardless, I only recommend products or services I use personally and believe will add value to my readers. I am disclosing this in accordance with the Federal Trade Commission’s 16 CFR, Part 255: “Guides Concerning the Use of Endorsements and Testimonials in Advertising.”