There’s been a lot of thought and discussion in recent years about the Old School style of gameplay. For me, this is best embodied by 1st and 2nd edition Dungeons and Dragons. I’m a huge fan of the Old-School style of play, but I love the mechanics of 3rd edition and Pathfinder. 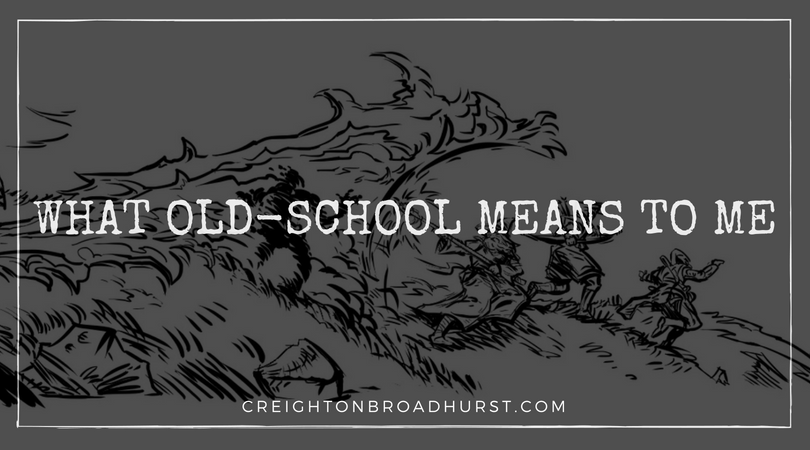 In designing my megadungeon, Gloamhold, my aim is to marry an Old-School style game to the newer (better) mechanics of Pathfinder. To do that, though, I have to first decide exactly what I mean by “Old-School.” For me, Old-School isn’t necessarily tied to one set of rules or another – the play experience is the thing!

So what do I mean by Old-School?

And Just One More Thing…

The rules in Old-School games are often much lighter and play is quicker than later editions. For me, I like the rich depth and complexity of systems such as 3.5 and Pathfinder. I like the customisability of players’ characters (and their enemies) and the tactical options available for combat. I don’t necessarily see this as incompatible with an Old School style of play–it’s just a challenge to marry the two! (That said, I wish we could get through more combats in a typical Pathfinder game.)

What Does “Old-School” Mean to You?

What do you think of when you think of Old-School play? Did I miss something or am I wildly off base? Should I be locked up? Let me know what you think in the comments below and help me build an awesome play experience for Gloamhold.

43 Comments Share Tweet Print Email
Categories: Creighton, Gaming Advice, Gloamhold
Disclosure of Material Connection: Some of the links in the post above are “affiliate links.” This means if you click on the link and purchase the item, I will receive an affiliate commission. Regardless, I only recommend products or services I use personally and believe will add value to my readers. I am disclosing this in accordance with the Federal Trade Commission’s 16 CFR, Part 255: “Guides Concerning the Use of Endorsements and Testimonials in Advertising.”

43 thoughts on “What Old-School Means to Me”