As you might recall, I was at UK Games Expo at the weekend. While I’m still suffering from “con brain” I have recovered enough to gather my thoughts about the con. 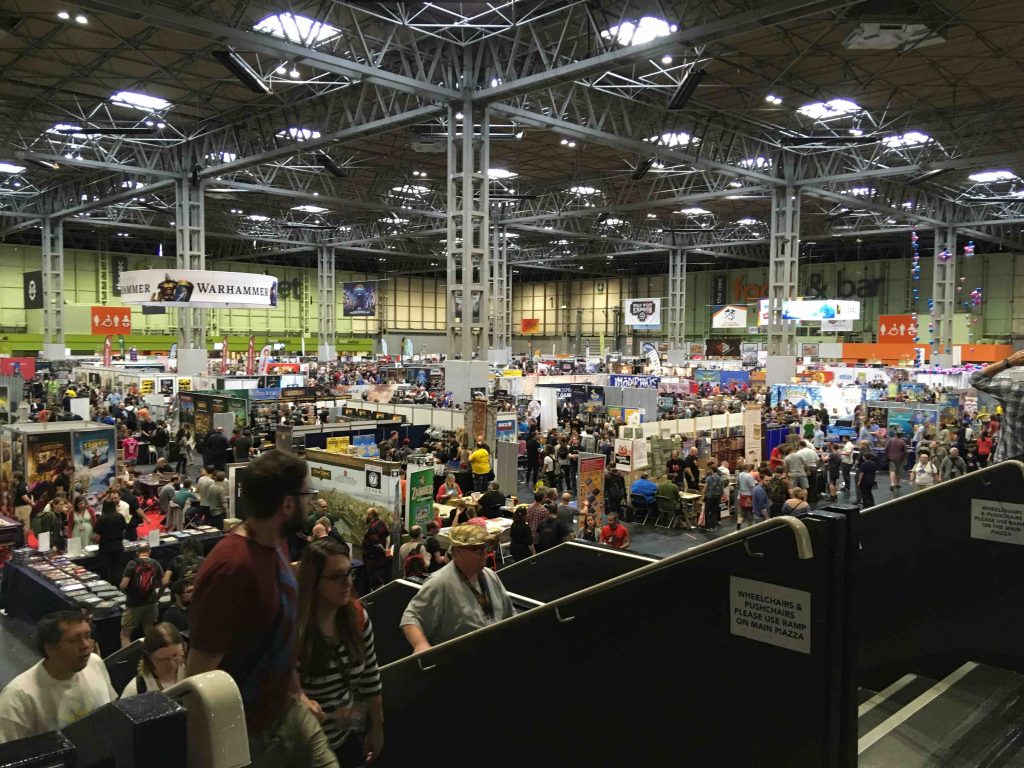 This place is massive. I mean massive. I’ve done some of the US Gen Cons and they are mega-massive. UK Games Expo is the biggest con I’ve been too since then, and certainly the biggest convention I’ve attended in the UK.

I stayed at the Hilton. Signage between the hotel and the convention site was excellent. Even I didn’t get lost (which, believe me, is impressive).

I turned up on Thursday afternoon. Ticket pickup was a breeze. The booth had loads of windows open and there were no queues (unlike Friday morning when the queues were immense). The con provided lanyards and so on, but sadly when I arrived they had run out of programs. I popped back later, though, and picked one up. (The Hilton is only a five-minute walk from the NEC).

Friday morning (and Sunday morning as it turned out) was shopping time for me, and wow was there a lot of shopping! By the end of the day I’d managed to meander round the whole thing a couple of times, but I’m sure I missed stuff. I’m amazed by the sheer variety of stuff available now for our hobby. Beyond different board games and roleplaying games, there is so much other stuff available to make our gaming experiences more fun.

Of course, I’m a sucker for new dice—so I got my son some sets along with a dice bag—and I picked up a lovely wooden dice storage box with integrated dice tray along with other bits as and bobs. I also managed to snag a copy of the Call of Cthulhu fast start rules along with a solo adventure and a solo mini-campaign. I am looking forward to playing both immensely. My GM had also commanded me to pick up some things for our Skulls & Shackles campaign and I compiled with his dictates.

Shockingly, part of the reason I went to UK Games Expo was to learn as much as possible about Pathfinder 2e. Given, a large part of Raging Swan Press’s business is Pathfinder compatible products it seemed only wise to get as much information as I could.

Prior to the convention, I was a bit leery about the upcoming edition. I found getting a good sense of the upcoming changes from the Paizo blog—and the resulting conversation in their forums—tricky.

Thus, my main plan was to slip adroitly into a Pathfinder 2e game. The playtest was fun but brief. I would have preferred to play longer as the game wasn’t really enough time to immerse oneself in the new rules. That said, what I saw I enjoyed. Actions in combat are much more intuitive and fluid. I like the basic concept of “take three actions”. It’s hard to get confused with that. “Sadly” we inflicted so many crits on the baddies the adventure was over pretty quickly.

In the afternoon, I wandered into the first of two Pathfinder 2e seminars and learnt more about the game. Having played the game earlier I’m a lot more positive about the upcoming transition to 2e. I’m not sold on all the changes—not rolling for hit points seems sheer madness—but I thought the changes to critical successes and failures jolly fun and I’m looking forward to the resonance mechanic changing the way PCs acquire and use magic items. It would be nice for the PCs to achieve victory through heroic action instead of prudent shopping.

Other highlights of the show included bumping into a couple of Raging Swan’s patrons (Hi, Dave!), catching up with some old chums (Hi, Julian, Erik and Jason!) and meeting several people I’ve worked with for ages but never met (Hi, Richard and Matt!) I almost met Stuart Kerrigan—an old Living Greyhawk chum—but he swept passed me and disappeared into the swirling crowd before my brain registered his sinister and malign presence.

I very much enjoyed my time at UK Games Expo. I had not realised how big the con was and how many people would be there (apparently 20,000 on Saturday). I will absolutely be back next year!

Did you go? Were you there? Let me know, in the comments below.

1 Comment Share Tweet Print Email
Category: Creighton
Disclosure of Material Connection: Some of the links in the post above are “affiliate links.” This means if you click on the link and purchase the item, I will receive an affiliate commission. Regardless, I only recommend products or services I use personally and believe will add value to my readers. I am disclosing this in accordance with the Federal Trade Commission’s 16 CFR, Part 255: “Guides Concerning the Use of Endorsements and Testimonials in Advertising.”