At the end of last session, the left the heroes on the Mermaid’s Mistress just off the Ratik coast. Thaladan and Cortanna had just returned to the boat and Markessa was making ready to get underway.

However, it was then Narfu and Grooble dropped a bombshell on the rest of the party. They had decided their presence in the group was now detrimental to the quest. Grooble in particularly seemed convinced his mother had accidentally let slip details of the Secret Quest to undesirable elements. He further suspected, the party she was planning to throw for their return to Ratik was a trap and that Demogorgon’s cultists would strike in a bid to take the shards for their own.

All was not lost, however, for Shel Heidmarch had been apprised of the situation and had recruited two new adventurers to join the quest. They would join the party after Grooble and Narfu had been put ashore.

Thus, it was with a heavy heart the party sailed north. They reached Marner at dusk the next day, and the party finally split. With Grooble and Narfu beset with well-wishers as soon as they set foot on land, the rest of the party slipped out of the harbour aboard the Mermaid’s Mistress.

However, they were not alone. Shardaine, a half-orc follower of Pelor, and her trusted henchman Pip now stood ready to aid the quest. When the ship stood slightly further out to see another adventurer—Vesleng—joined the group, flying out of the gloom on a gigantic bird.

Thus, the party was brought back up to strength and continued northward.

Two days later, the Mermaid’s Mistress dropped anchor at a remote cove and the party, along with Cortana’s Grey Maidens put ashore. Without further ado, they push inland to find Perrin’s Bluff. There they hoped to peruse certain ancient records believed to shed light on Windsong Abbey and its strange alliance of clergy.

However, their journey was not fated to be boring and incident free. As they neared a wood range of hills, Zainniss—scouting ahead—heard screams. Moments later a peasant family ran from the woods. Zainnis did not have long to wonder what pursued the peasants for streaming from the woods came a veritable horde of skeletons clad in all manner of rusting, archaic equipment.

The party sprung into action. Cortanna deployed her Grey Maidens while Zainnis rushed to cover the family’s headlong retreat. Veslang used his powers of the land to slow the skeletons with first entangle and then a sleet storm. Meanwhile, Karelia annihilated some of the skeletons with a well-placed fireball.

However, there were many, many skeletons. One seemed a powerful spellcaster for a towering pillar of black fire slammed down from the heavens badly burning Cortana and Shardaine. Two of the skeletons also seemed stronger than the others. Armed with vicious-looking scythes they were some of the first to emerge from the sleet storm. As Vesleng moved to engage them, one of the skeletons struck him a catastrophic blow with his scythe almost slaying the druid! 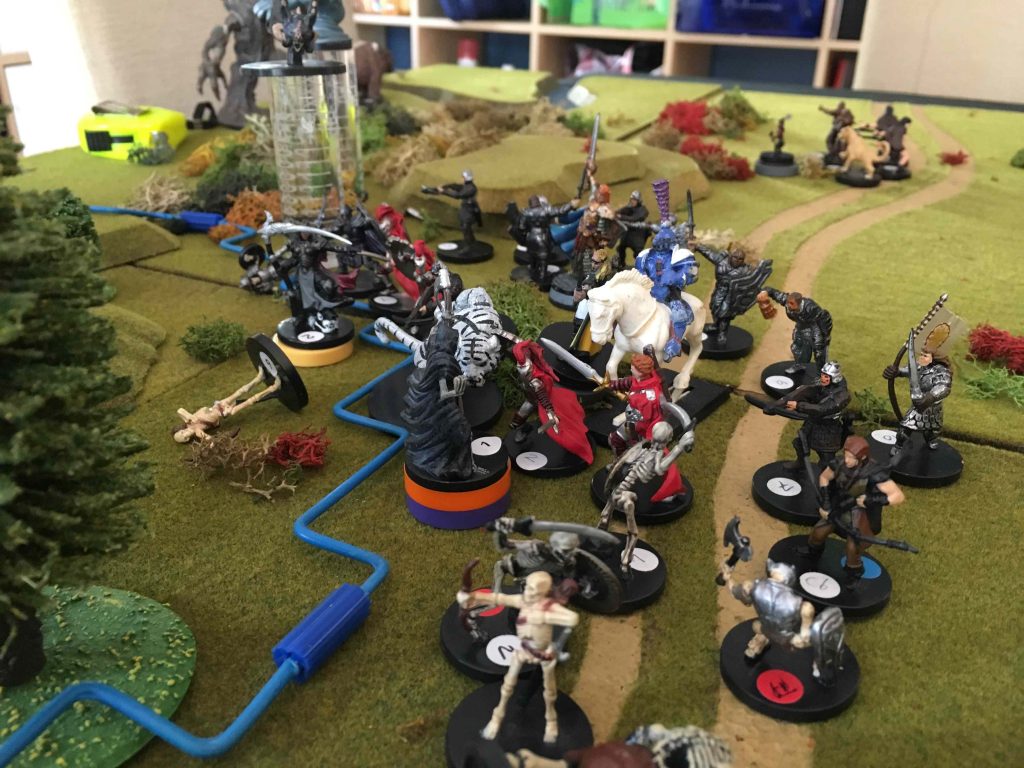 Vesleng’s comrades swiftly moved to aid him, and although large numbers of the normal skeletons were now falling to the party, it seemed the battle was not yet over…

One thought on “Shattered Star #80: The Dead Walk!”