At the end of last session, our heroes had just left Black Cove, and set sail south to Kaer Maga—the so-called City of Strangers—and the next fragment of the Shattered Star.

A week later, the Mermaid’s Mistress slipped into at Rel Astra—the biggest city any of the party had ever visited. Their journey had been relatively uneventful. Many of the party did nothing but relax and recover from their ordeal. Grooble, however, spent the time pondering the contents of a letter from his mother delivered to the vessel while he had been battling the aboleth and its minions on the accursed island whose name he refused to speak. 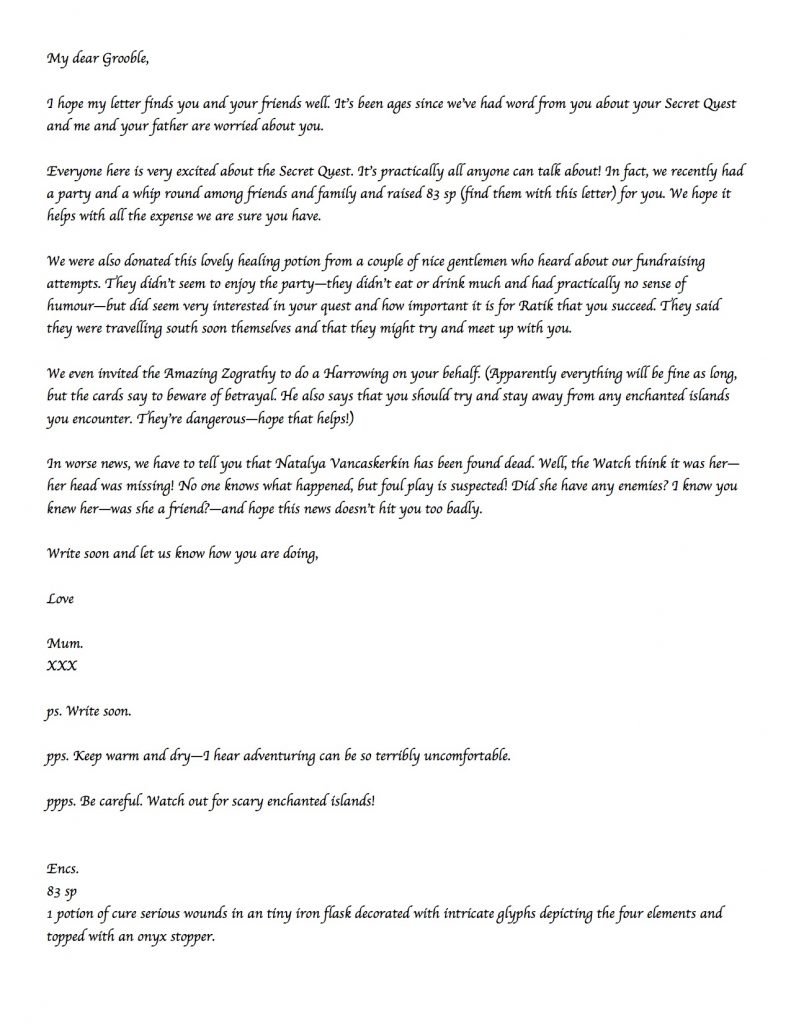 Grooble was suspicious of the vial holding the potion of cure serious wounds included with the letter and originally planned to throw it away. However, his companions came up with an even cleverer plan. In case the vial was being used as part of a powerful scrying spell, they convinced the gnome to sell it once they reached Rel Astra—for there it would doubtless lead any inquisitive diviners a merry chase!

Meanwhile, Cortana had spent much of his time below decks instructing the Grey Maidens the party had rescued from beneath the Lady’s Light in the correct way to worship Heironeous. One-time followers of Heironeous’ evil brother Hextor, the warrior-women were making excellent progress under Cortana’s firm guidance.

Such activities paused while the party was in Rel Astra, however. This teeming metropolis was to be the party’s home for the next month or so as they rested, re-equipped and recuperated from their recent trials. All reflected on their experiences and learned new abilities that would hopefully aid them in their quest.

While in the city, Karelia and Zainnis also confided in the party that they were experiencing strange effects after being dominated by the aboleth. Karelia was dreaming terrifying nightmares of a sunken city while Zainnis was growing increasingly convinced the sea was whispering its ancient secrets to him. Their companions were unsurprisingly worried by the duo’s experiences and resolved to purchase the very best healing magics available…when they could afford them.

Finally, the party was ready to depart and this they did. Another month at sea saw them slowly work their way southwards to Kaer Maga. The weather and the seas were kind, and eventually they reached the coastal town of Lilywhite. As Markessa manoeuvred the Mermaid’s Mistress into port, it became evident they had arrived during a festival! Much carousing was in evidence and the entire town seemed to be involved. The party were met at the docks by a friendly follower of Cayden Cailean—a god whose portfolio included drinking! Although the Grey Maidens elected to stay aboard ship—it seemed the frivolity might be too perilous to their burgeoning faith—the rest of the party (preceded by the rapid departure of the Mermaid’s crew) hurled themselves into the midst of the revelling throng.

Eventually, they reached the temple-bar Cailean’s Keg. The place was packed, and the first drinks were free. As the party relaxed and enjoyed their first drinks several noticed a drinking game being played at the far end of the room. Watched by many of the worshipping throng the game—The Lucky Drunk’s challenge—seemed very popular and several of the party resolved to have a go…