At the end of last session, we left our heroes battling four caryatid columns!

Crafted from super-hardened stone, the implacable constructs were terrible enemies. Morden broke his warhammer against one of the beasts’ stony body while several of the others dealt terrible injuries to the party—particularly Morden and Zainnis. However, eventually, the creatures were all destroyed and the party could rest and heal their wounds. 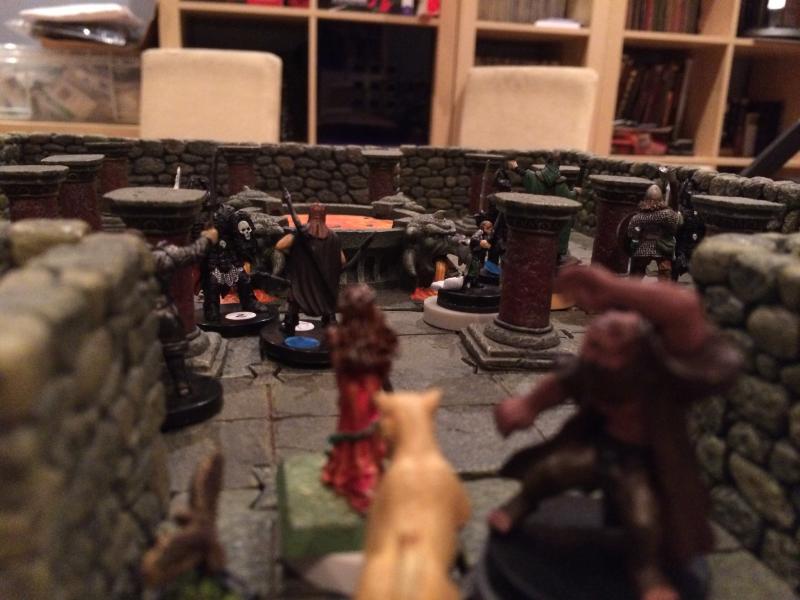 The only remaining feature of interest in the chamber was the hole in the floor. No sound or light emerged from the hole and the party cautiously investigated the seemingly innocuous—but likely tremendously deadly—hole. It was quickly determined three magical auras filled the hole and that it was a little over 50 ft. deep.

The party decided to rest so the spellcasters could regain their powers and prepare spells suitable for the travails ahead. The next morning, Grooble conjured a blinding radiance on a sling bullet. The light was so bright it countered the deep darkness filling the hole and revealed a smooth shaft dropping about 50 ft. into a hallway. Narfu—still not sure all danger had passed—threw a handful of small spiders he’d carefully gathered in the nearby caverns into the shaft. To everyone’s amazement, the spiders slowly floated down—a feather fall affect clearly protected those proceeding downwards.

Or course,  Narfu ended up scouting ahead. He discovered two hallways at the bottom of the shaft and a sarcophagus resting on a plinth. A painting on the sarcophagus’ lid depicted a beautiful woman at rest. There seemed no obvious danger and so the rest of the party joined Narfu (but not before knotting a rope and tying it to one of the columns in the room so they could escape back up if needed).

Kara seemed particularly keen to open the sarcophagus but much of the rest of the group seems against the idea. Kara was convinced the next shard lay in the sarcophagus as something inside radiated overwhelmingly powerful necromantic magic. However after much debate—and Nok using his shard to determine another shard did not lie within– the party pushed on. At the end of one corridor, they discovered a subterranean river while the other hallway was blocked by a metal wall of strange origin. Intricately carved panels covered the door depicting a beautiful woman conjuring and binding various otherworldly creatures to her bidding.

At this point, Narfu noticed Zainnis had disappeared. Realising what the impetuous young ranger was about to do, he dashed back down the hallway to find his friend pushing open the sarcophagus’s lid! Narfu hurled himself against the lid and tried to push it shut. As he did, more of the group arrived to help! Before they managed to slam the lid shut, several of them saw the perfectly preserved body of a beautiful woman—the same as depicted on the sarcophagus’ lid—dressed in beautiful robes wearing much jewellery. Despite this temptation–which gnawed at Grooble particularly—they shut the sarcophagus deeming it too dangerous to meddle in such things.

Pushing the middle panel of the metal wall caused the wall—actually a door—to slide open to reveal a sandy beach. Two boats tied to mooring posts bobbed in the water nearby. Kara determined that both boats and mooring posts radiated powerful conjuration magic. It was theorised the boats might be teleportation devices of some sort. Unfortunately, the party was too numerous to fit into the boats. When they tried, the boats prompt sunk. Luckily, at this point Narfu realised the river was only about three-foot deep.

Still, they were cautious. One boat piloted by Narfu headed upstream to see what lurked in the darkness. With him went Zainnis and Grooble. They discovered a dead-end of sorts. Water tumbled through a grate in the ceiling into the water. A large statue stood in an alcove nearby. Narfu also noticed a narrow sunken passageway in one wall, but no one seemed inclined to explore it. After investigating the area for a while—and discovering the statue was both hollow and full of water—the scouts backtracked to the rest of the party.

After reporting what they’d found, Narfu then piloted the boat downstream. Shortly thereafter, they floated into a huge, impressive cathedral-like cavern lit by many floating motes of light…