The Twisted Gorge runs for almost a mile, cutting through a range of steep, heavily wooded hills roughly 35 miles north of Wolverton. Like a great, festering wound, the Twisted Gorge draws creatures of evil to it as a corpse calls to a starving wolf. 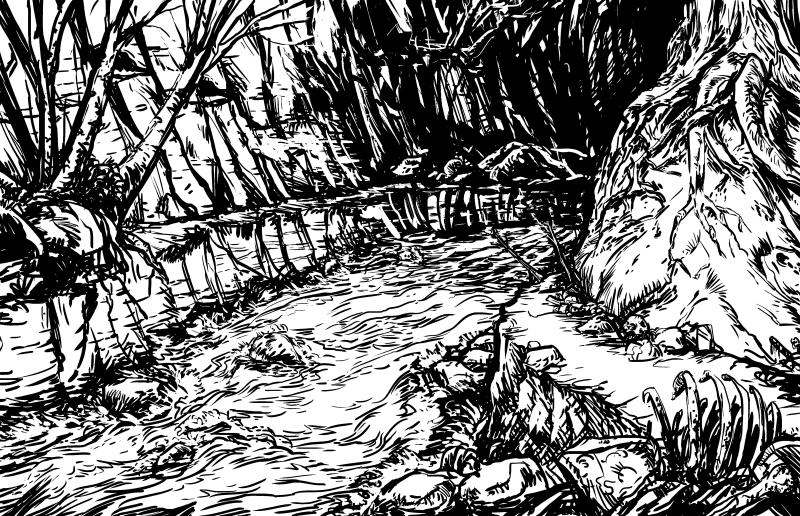 The Twisted Gorge By Matt Morrow

The gorge is narrow and steep-sided. The ground is choked with rocks, boulders and trees fallen to ruin from the surrounding cliffs. Bleached bones, rotting corpses and rusted and mouldering equipment – legacy of the many battles fought here – lie intermixed among the tumbled mass of stones and boulders in mute testimony to the violence wrought in this place. An aura of bleak desolation hangs over the place like a foreboding cloud.

Huge trees throw their leafy crowns far out over the precipitous, crumbling cliffs, further adding to the gloomy shadows piled deep upon the gorge’s floor. During the winter months, sunlight never reaches the gorge’s deepest recesses. Even in summer, full daylight only illuminates the Arisum for several hours around noon sun.

Caverns and passageways honeycomb the cliffs. Tribes of kobolds and orcs claim many of these caverns while others are home to powerful and territorial monsters. Warfare between the tribes is frequent; alliances shift with the tide of war.

Other passages and chambers plunge still deeper to networks of caverns undiscovered by those dwelling in the sunlit surface world. This convoluted network of twisted caverns plunges deeply into the hills; what lurks within is unknown, as the creatures of the upper caverns in the main do not dare to explore these caverns and no adventurers are known to have survived an exploration of their depths.

At the head of the gorge, a nameless waterfall tumbles over the cliffs into the frigid waters of Dark Mere, a foreboding, ill-favoured lake of unknown depth that births the swiftly flowing Arisum. Above the lake – carved into the cliff’s living rock – a rambling ruin of (presumably abandoned) precariously perched buildings and pathways flank the waterfall. Access to the ruins is via a steep, slippery flight of foot- and handholds carved into the cliff face.

The Twisted Gorge is a place of dangerous adventure and peril-laden battle from which many neophyte adventurers do not return. For a few, however, the tumbled rocks, dark shadows and lurking perils are the anvil upon which their legend is forged. These lucky few stumble from the gorge, their packs full of battle-booty, their sword arms aching from constant use and their desire for adventure and glory undimmed.

Help your fellow gamers by adding a piece of dungeon dressing suitable for the Twisted Gorge into the comments below!