At the end of last session, we left our heroes standing in the midst of Ratik’s camp having beaten off an assassination attempt against Krotz. Quickly, the corpses of the two fallen assassins were dragged away for investigation, but Krotz found himself in an awkward position when he was closely questioned as to why the assassins were shouting “Slay Vhazror’s bastard!” as they attacked him. However, more important events were transpiring and for now the Volunteer Borderers’ commanders had other things to attend to.

The next morning, it was revealed that the army would march deeper into the hills in a bid to reach the ruined church discovered by the party before the orc horde. During the day’s march, Ratik’s peasant levies joined the army, doubling its numbers. However, the orc horde – thought to number around 9,000 – still vastly outnumbered Ratik’s army. That night as the army made a hasty camp, their numbers were again bolstered, but this time by 600 or so sylvan elves – denizens of the Loftwood come to aid Ratik in its struggle.

The next day’s march was also without incident and that nightfall, the army was camped in the valley below the ruins. It was then that the party discovered that they had been chosen to hold the ruins against all comers during the imminent battle. 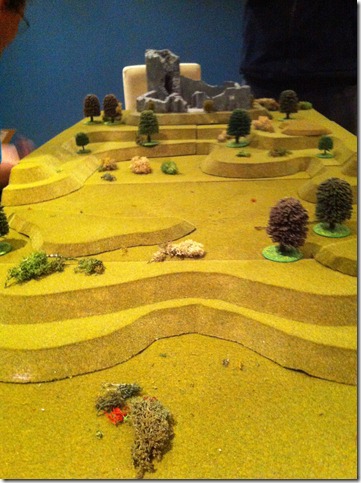 While the main army would muster in, and hold, the valley, the Volunteer Borderers would be deployed along the valley sides to stop infiltrators out-flanking Ratik’s beleaguered forces. Drawing weapons and equipment from the army’s stores, the party made their preparations. As they did so, the camp fires of the orc host burned a lurid red to the east not a mile or two distant. Battle was clearly imminent.

That night, while on watch Klara spotted someone trying to sneak into the church. She shouted a warning and the figure fled, but not before once again shouting that Vhazror’s Bastard would surely die.

The next morning, battle was joined quite early. The orc horde, marching under cover of a wan dawn, spilled into the valley and attacked Ratik’s host. It was not long before the party came under attack. 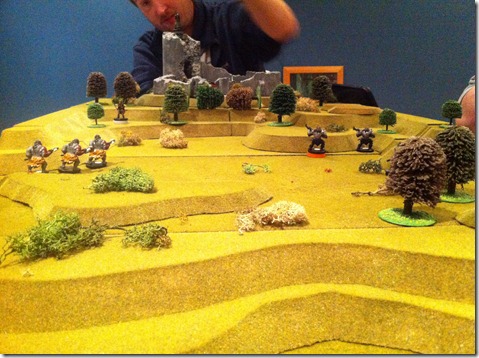 Six ferocious orc berserkers burst forth from the main host and rushed to attack the party’s position. Most of the party stayed in the ruins, but Delvier rushed forth to do battle. 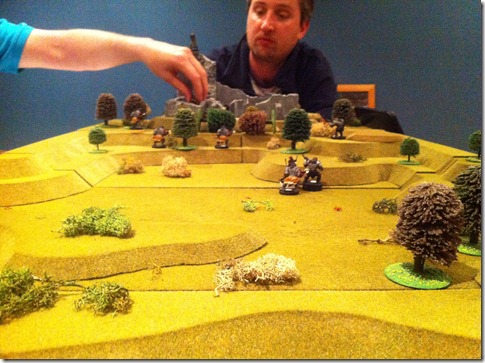 Although badly injured, he managed to slay two of the beasts, but would have died if not for Adoven’s intervention with powerful healing magic. Shortly thereafter, however, the rest of the orcs fell – the party had beaten off the first wave of attackers. Their victory was not without cost and although no one had fallen, they had expended quite a lot of their healing magic,

As the battle raged on the valley floor opposite on the other side of the valley the mercnary Queg and his companions used tree trunks pushed down the hill to disrupt a concerted hobgoblin attack. As this attack was repulsed, the party’s position was again assailed. This time a much larger group of orcs – a mixture of warriors and archers – attacked the ruins. 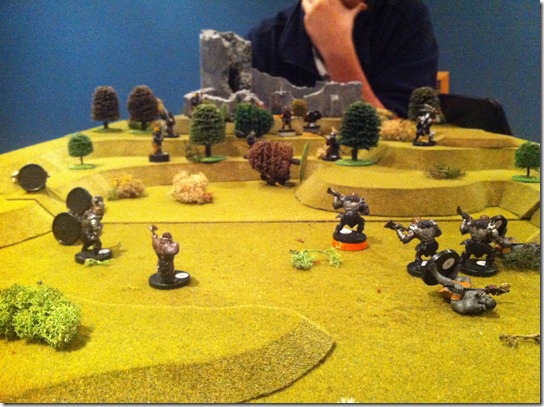 This much more numerous force managed to breach the party’s defences – some of the orcs breaking into the ruins themselves. 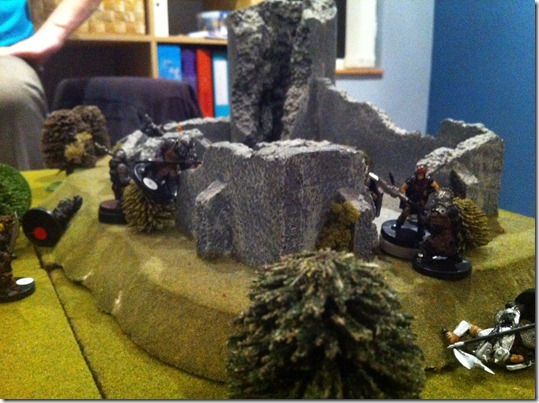 However, again, the party’s desperate, tenacious defence of the church proved too much for the attackers and the few survivors retreated back into the valley. 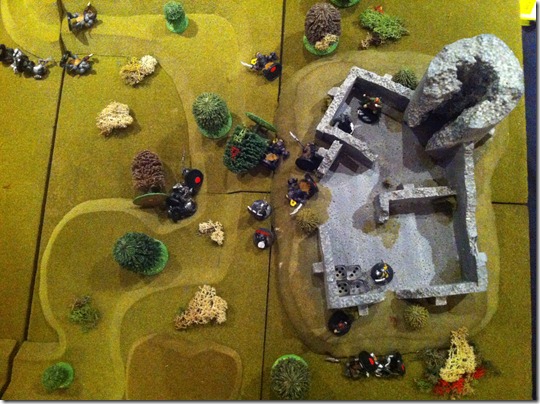 By this time, it was getting on for mid-afternoon and in the valley, the slaughter continued. As the party bound their wounds and repaired their defences as best they could another band of attackers – led by a familiar figure – could be seen mustering on the valley floor below. It seemed the party’s heroic defences would be tested once again…

One thought on “Borderland of Adventure #40: The Slaughter Begins”