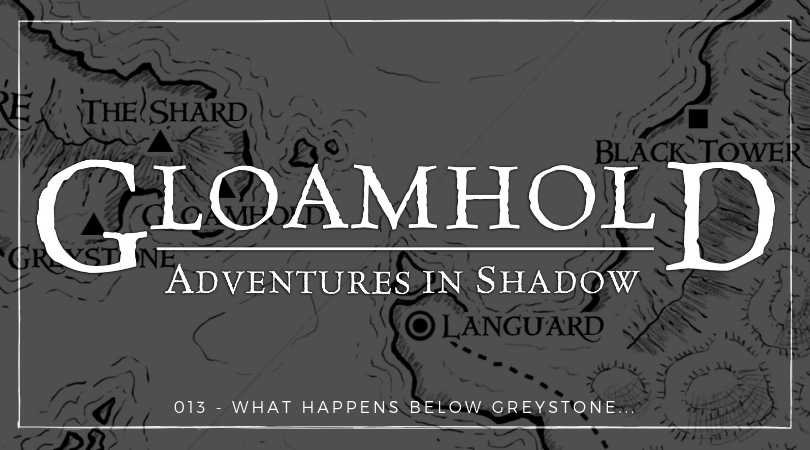 One night, the common room of the Orc’s Head was packed. Einar was selling ale cheap because he had hired the services of the Yellow Roses—a renown local group of performers and singers to entertain the throng. The group were quite popular and had a sizeable local following. Through the long night of song and revelry, the Yellow Roses sang many songs, some of which—including the Ballad of Olli Hirvi, Down to a Sunless Sea and Terror and Madness Lie Within spoke of Gloamhold and the lady legends shrouding the place. They even attempted Fall of a King, but sang a rough translation of the epic elven tale in Common. Veronwe scoffed and declared it was far superior in the original elven. Meanwhile, Orm drank several gallons of ale—trying to put a considerable dent in the tavern’s supply—and suffered greatly the next morning.

Still, by the end of the week, they were again ready to depart. Gathering in the early morning light—as was their wont—they prepared to embark on Taneli’s boat. However, Barlon, their erstwhile man-at-arms, did not arrive. It transpired, he had had enough—and after hearing the distant screams and shouts of those dragged down into the stygian depths of Greystone’s harbour—he had retired to an easy life of guarding merchant’s shops and so on.

The party debated the matter, and decided they no longer needed a guard. Taneli was a little concerned, though, at recent events and the heroes undertook to pay his family an entire year’s wages if he should lose his life in their service. Thus placated, Taneli ferried the party over the bay to Greystone.

Again the grey bulk of the Mottled Spire loomed over their tiny boat as they approached the seaweed-wreathed breakwater of Greystone’s harbour. Toliyrath grew strangely quiet as the boat passed the Murkwater’s gaping maw, but the mage would not be drawn on the reasons for this melancholy.

Shortly thereafter the party were amid Greystone’s ruins. Although they had decided to explore some of the tunnels under the village now they were here, they changed plan and decided to give the Hall of the Storm Mistress another look. As they made their way to Serat’s ruined temple they came across a strange sight—someone had laid out a great mass of seaweed amid the rocks to dry. The party theorised the strange humans harvested the seaweed as part of their diet and so most of them vengefully set about hurling the seaweed back into the harbour. Johann kept watch while they were thus engaged and his ever-alert eyes caught a slight movement—perhaps writhing—on the walls of the Alanen’s ruined manor. Luckily, nothing descended from that high place to slay them and so, their vandalism complete, the heroes pushed on.

While most of the party had been busy with the seaweed, Thangrimm had moved off on his own to investigate the ruined Storm Mistress’s hall. He discovered it empty and much as he remembered it. However, he discovered something in the ceremonial pool. The tide was slightly further out than when they were last here and his sharp dwarven senses detected a change in the movement of the seaweed cloaking the pool’s sides. In one particular spot, the seaweed undulated more than the rest with the rise and fall as the sea water lapped against the pool’s walls. Thangrimm suspected a niche or some such lay beyond.

When his companions arrived, they investigated and indeed discovered a section of seaweed seemed to hide a passageway or deep niche. After a brief discussion, they wisely decided to postpone investigations of what lay beyond until the tide has reached its lowest ebb—about two hours hence.

With this new information, the heroes turned back to the caves riddling the cliffs. Starting at the cave entrance at the extreme west of the village, they plunged into the darkness beyond.

In short order they discovered a baffling network of caves and caverns. Some passageways were relatively wide and free of obstructions while others were much narrower and harder to traverse. After a short while, Thangrimm—who was in the lead—heard a strange, curious sound ahead as if someone was pulling a weapon or claw across the bare rock of the cavern walls. Intrigued he moved to investigate and the party followed.

As he advanced, the sound seemed to recede. Resolutely the dwarf pushed on up a narrow passageway that gently rose and fell as it twisted and turned. Eventually, the party came to a small crawlway low down on the floor in one wall. Tracks in the dust suggested whatever they were hunting had crawled into the hole. The squeezeway was incredibly tight—perhaps only a foot or two high, but undaunted the redoubtable dwarf stripped off his armour and plunged into the hole. Orithur, accompanied by his clearly unhappy wolf, followed while the rest of the party wisely stayed behind.

The crawlway continued for some considerable distance. Ahead, a subtle change in the air warned Thangrimm he was approaching a shaft. Cautiously now, the dwarf crawled forward to the edge of the natural chimney. With blinding speed a small, grey abomination with long and sinuous arms tipped by five claws emerged from the shaft and grabbed Thangrimm. In seconds it had latched onto the dwarf and was strangling him. The tight confines made battle difficult, and Orithur could not attack the fell creature. Instead, he quickly healed his friend who now thrashed about seemingly helpless to escape the creature’s deadly grip.

Desperately, Orithur fumbled about in his pack for something to help. His hand touched on a bar of soap and he suddenly had a plan. Crawling up his friend’s legs until he had a uncomfortably close view of Thangrimm’s heaving buttocks, he desperately reached forward around the flailing dwarf and rubbed soap all over his friend’s beard and head, trying to get up a slippery lather so Thangrimm could escape. Unfortunately, while he did so his wolf companion—following his last command—followed the druid coming right up behind him forcing the unfortunate druid “cheek to jowl” with his friend. Now the dwarves were trapped. Thagrimm could not go back, and to go forward invited a long fall down the shaft.

Eventually, Orithur’s soap did the trick and Thagrimm managed to escape the creature’s fell embrace. Shouting and screaming at the creature, he startled it enough that it backed off slightly. Seizing the opportunity, the dwarves quickly extracted themselves from their strange embrace they shared with Orithur’s wolf and crawled back down the passageway.

Before they returned to the rest of the group, the two vowed never to speak of the strange position in which they had found themselves—what happens below Greystone, stays below Greysyone they agreed. Returning battered and bruised to their companions they related (roughtly) what had occurred omitting only details of their embarrassing embrace. Pondering Thangrimm’s description of the creature, Johann tentatively it as choker—a foul aberration dwelling in the deep places of the world. It seemed that more than just ugly, debased humans dwelled in the tunnels below Greystone…