At the end of last session, we left our heroes about to get drunk!

The party was in the Cailean’s Keg temple-bar and several of them were very keen to play (and win) the Lucky Drunk challenge. First to try her hand was Karelia, but the skilled sorceress was no match for six rounds of strong drink! Zainnis—laughing and teasing his now very drunk and sick companion—demanded to go next and boasted that he would surely win the prize—a  beautiful silver stein. Hilariously, the cocky ranger also crashed out of the competition on the sixth round after vomiting up a large glass of spicy liquor from the far south.

With Zainnis’s abject failure, only Grooble and Thaladan remained—Cortana refusing to take part as he viewed the whole thing as frivolous and silly and Narfu wisely saving himself for the fighting bouts at the Gods Revel.

Sadly, it seemed Heironeous also disapproved of his servant’s excessive drinking. While Thaladan—with his redoubtable constitution also failed to get passed the sixth round—Grooble seemed to be a veritable drinking machine! He drank the last of his competitors under the table on round seven, winning the silver stein. However, the now wildly inebriated gnome demanded to drink on—visions of crushing the record of 11 rounds and winning a golden stein dancing before his eyes. Sadly, even the gnome’s iron-clad belly could take little more and rapidly thereafter he also decorated the floor with the contents of his stomach.

With most of the party hopelessly drunk, now seemed the perfect time for a fight. Zainnis demanded to take part, but the young ranger could barely stand let alone fight. As Narfu and Cortana led their stumbling charges through town, it seemed certain that only Narfu would be able to compete. This he did so, defeating the God’s Revel champion in a hard-won bare-knuckle bout.

After Narfu’s victory, the party decided to wander the town, and drink in the sights. However, it was now late and eventually they staggered back to the Mermaid’s Mistress to sleep off their heroic drunk.

The next morning—bright and early and as his teachings dictated—Cortana decided to march the Grey Maidens up and down the deck in full armour while they sang hymns in praise of Heironeous. His companions were delighted.

Unsurprisingly, the party achieved nothing this day and it wasn’t until the following morning they managed to be ready to set out for Kaer Maga—after agreeing with Markessa she would wait a full month in port before returning to Ratik.

It began to rain around midday as the party made their way toward Kaer Maga. By dusk, a full-on thunderstorm had developed and as the party were thinking of stopping for the night they came across a halfling sheltering near a horseless wagon. It transpired, the halfling’s horse had become frightened and run off, damaging the wagon. While Zainnis and Narfu went to retrieve the horse the rest of the party chatted to the halfling, who introduced himself as Felin Pennythicket, while Grooble used magic to fix the cart.

Felin was a kindly fellow travelling to Lilywhite and related some recent news. It transpired several strange things were happening in the City of Strangers: the Therassic Spire library had closed its doors for the first time in its history and the Augur trolls were on strike!

The next morning, the party took their leave of Felin and continued on their way, reaching the Halflight Path and the Twisted Door that afternoon. A queue of merchants waited to use the path, but one of the Duskwardens—Abra Lopati—in attendance ushered the party to the head of the queue as he was heading up to the city and needed to move fast.

Thus the party finally entered the Halflight Path and begun the final part of their journey to Kaer Maga. Their travel was quiet and swift until they reached a larger cavern. Up until now, all the side passages that no doubt led to the deep dungeons below the city had been bricked up, but the mortar and stones blocking one such passageway were loose. As Abra commented on this, the stones exploded outwards and a veritable horde of fast-moving zombies burst forth. With the zombies strode a horrible skeleton-like creature whose entrails yet coiled around its bleached and pitted bones.

The zombies surged forth, but were no match for the party’s puissance. Even the strange creature—identified as a mohrg—proved little threat although Grooble’s beloved eagle was badly injured in the ensuing battle. 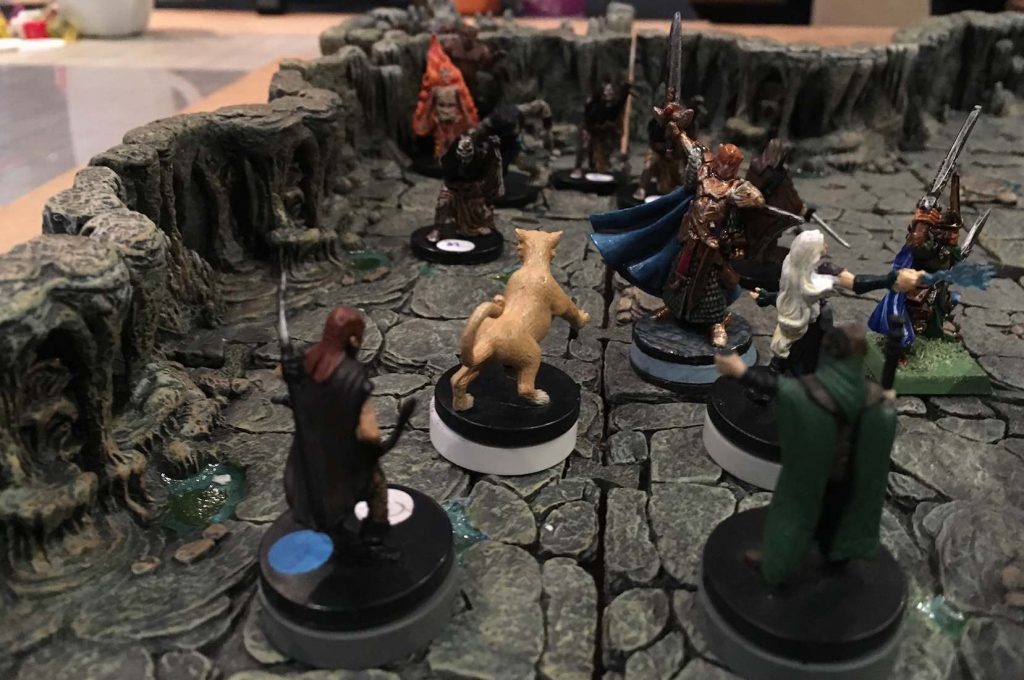 With the creatures destroyed, the party paused to heal their wounds and Grooble used a quick stone shape to seal the passageway so that nothing else could come through. Faster now—Abra needed to warn his fellows of the incursion—the party climbed higher and eventually came out into the dim twilight—ahead lay Kaer Maga’s immense walls and the next shard of the Shattered Star…