Buried deep in the Shoalstone, and only accessible via a precipitous, oft-flooded tunnel, the Cavern of Forbidden Dreams is a place of pilgrimage for those seeking forgotten elder knowledge. Standing miles out to sea, rising from the surrounding waters like the humped back of some great primordial beast, the Shoalstone is a place of dark legend and wild mariners’ tales. 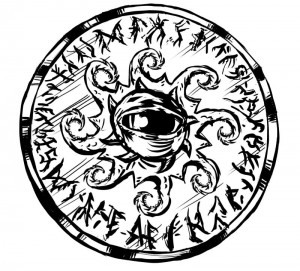 A steep-sided and lonely low-lying chunk of rock, the Shoalstone hosts vast flocks of sea birds on its foam-flecked flanks. Without any predators, these birds grow numerous and fat on the fish swarming in the surrounding shallow waters. Some mariners bestowed upon the birds accusations of malign intelligence and more than one black-hearted wizard has taken one to serve as his familiar.

At low tide, in the Shoalstone’s southern face, the retreating waters reveal a narrow passageway leading deep into the rock. A set of crudely hewn, steep steps thick with seaweed and barnacles provide access to the caverns below the Shoalstone. Explorers should be wary, however, for much of this complex floods at high tide, cutting off the inner reaches from the outside world.

Disturbing carvings of foul creatures carrying out unspeakable rites and worshipping nameless elder things decorate many of the passageways and corridors. In a few places, humans are shown—invariably being sacrificed or tortured in horrible, barbaric fashion. The darkness here is oppressive and the narrow, winding passages claustrophobic.

Strange things dwell in the darkness. Those that have survived their visit of the caverns report the caverns are haunted by the ghosts of elder beings bound to the place by some unguessably powerful curse. Whatever the truth, these foul creatures slay all those entering their domain, save for those bearing certain sigils or implements which seem to hold them at bay.

Legends tell of brave (or foolhardy) adventurers dwelling within the caverns in an attempt to commune with the spirits lurking in the cloying darkness. Such folk are often said to suffer terrible dreams of ancient places and events. From these fevered dreamings came the first record of the inner reaches of Gloamhold and of the Twilight City buried deep in its dusty, benighted depths. And even now, sometimes those planning to dare Gloamhold’s terrors come to the Cavern of Forgotten Dreams in the hopes of learning fragments of forgotten lore that will prove the difference between a successful delve and disaster.

Through dint of their personal local knowledge or their efforts to gather information, the PCs likely know some generally accepted facts about the Shoalstone.

6 Comments Share Tweet Print Email
Category: Gloamhold
Disclosure of Material Connection: Some of the links in the post above are “affiliate links.” This means if you click on the link and purchase the item, I will receive an affiliate commission. Regardless, I only recommend products or services I use personally and believe will add value to my readers. I am disclosing this in accordance with the Federal Trade Commission’s 16 CFR, Part 255: “Guides Concerning the Use of Endorsements and Testimonials in Advertising.”

6 thoughts on “Cavern of Forbidden Dreams”