As part of my ongoing design of Gloamhold and its innumerable shadow-drenched, doom-shrouded halls I’ve been thinking deeply about the nuts and bolts of adventure design. Here, I’m not talking about what monsters lurk where or what treasures they might guard. I’ve done that top-level plotting about the dungeon’s various denizens. 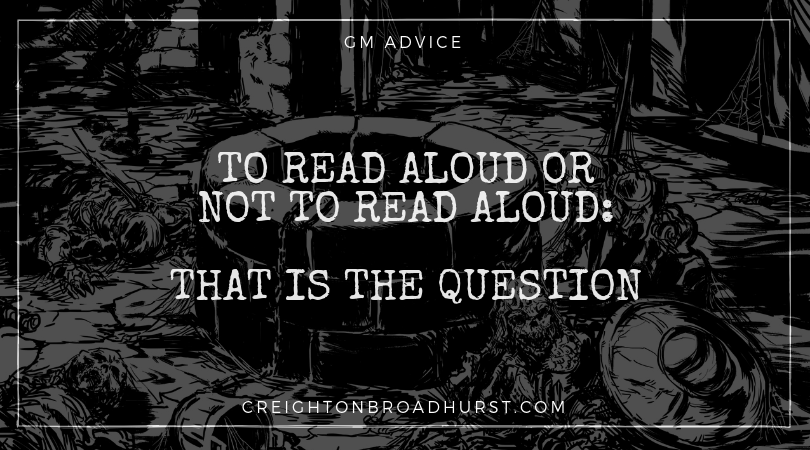 Rather, I’m talking about the physical layout of the book and what material to include to make the GM’s job as easy and frictionless as possible. As well as plotting what to include, it’s also important to decide what not to include.

On the face of it, this kind of design might not seem particularly exciting—and it isn’t—but good design is so much more than an exciting set of monsters in an interesting room guarding some cool glittering treasures. A product’s usability is critical. Only an idiot designer or publisher doesn’t keep in mind the eventual end-user (the GM) when designing a dungeon.

A badly laid-out or organised book fails the GM. It might mean:

If a book is badly laid out, it doesn’t matter how amazing its content is. If a GM can’t use the book, or has to put significant extra effort into using it, the book fails. If the text is badly laid out or contains the wrong information its an impediment to fun. All such impediments must be crushed.

For example, I remember running an adventure in which the PCs encountered an adventurer living in a room deep in a monster-infested dungeon. The first 800 words of the encounter—or so—were devoted to the adventurer’s detailed background. That’s a lot of words to read before actually getting to the room description, details on how the trapped adventurer reacts to the PCs and so on, given he essentially attacks the players as quickly as possible. It felt like the entire 800-words were just there to justify the adventurer’s presence in the dungeon. That’s a lot of words to justify a fight.

(As an aside on the subject of design, I’m colourblind and so sometimes when I print out an adventure I can’t actually read some of the text because the words blends into the page’s decorative background colour. For me, this creates a significant problem—and, is one of the reasons I love the old-school style illustration style).

As part of my Gloamhold design, I’ve been bravely buying and reading as many other megadungeons as I can get my hands on. Obviously, Undermountain features in the list as does Greyhawk Ruins and Barrowmaze Complete. I noticed one thing the other day: none of them, except Expedition to the Ruins of Greyhawk (written for 3.5), use significant amounts of read aloud text.

So, here is the question: could the space filled by read aloud text be better used?

Do you like read aloud text? Do you never use it? Let me know, in the comments below.

Check out My Gloamhold Campaign!

I recently launched a new campaign website for my Adventures in Shadow campaign. Come check out our adventures and learn more about the setting.

29 Comments Share Tweet Print Email
Categories: Adventures in Shadow, Gaming Advice, Gloamhold, GM Advice
Disclosure of Material Connection: Some of the links in the post above are “affiliate links.” This means if you click on the link and purchase the item, I will receive an affiliate commission. Regardless, I only recommend products or services I use personally and believe will add value to my readers. I am disclosing this in accordance with the Federal Trade Commission’s 16 CFR, Part 255: “Guides Concerning the Use of Endorsements and Testimonials in Advertising.”

29 thoughts on “To Read Aloud, or Not to Read Aloud: that is the Question”