A subtle and ancient curse of great potency and malignancy lurks within Gloamhold’s gloomy, dust-shrouded halls. Curiously, it seems only those who dwell in the world of men—humans, elves, dwarves and the like—fall prey to its malign influence. Those accustomed to living underground in the permanent dark of the ancient fortress’s ebon reaches appear immune to its effect. 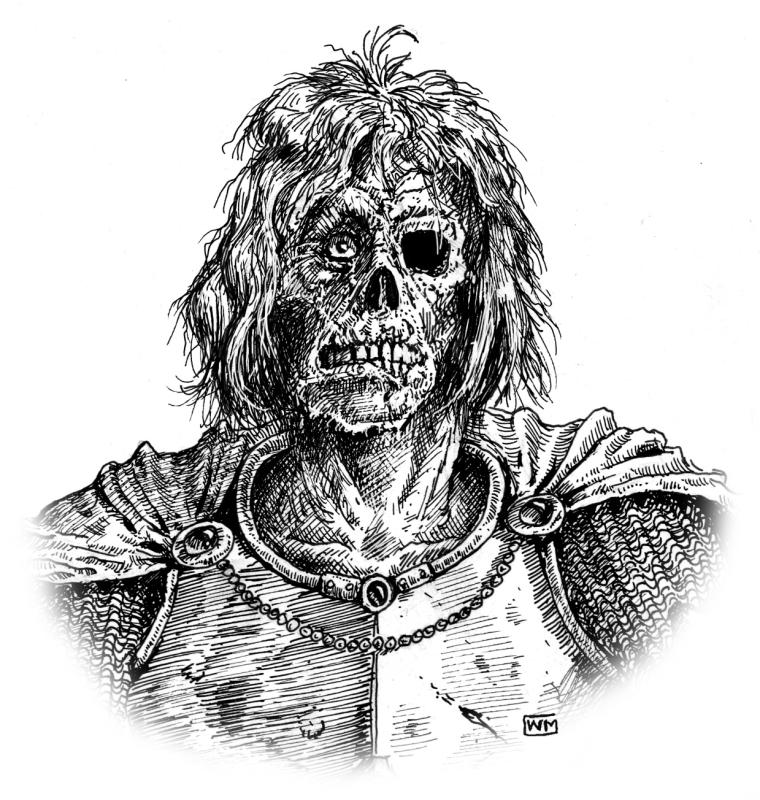 Thus, few explorers escape Gloamhold unscathed for the dungeon itself infuses its malignity upon all who tarry too long within its doom-drenched halls. Many who delve its depths emerge…changed. In the surrounding area those bearing a certain haggard, prematurely aged appearance or who appear distracted by things no one else can see are often referred to as having the “Gloamhold Look”.

Some explorers resist Gloamhold’s insidious influence longer than others, keeping it at bay for years while the unlucky ones quickly succumb to its subtle influence. To begin with, the Gloamhold Look is a subtle thing—manifesting itself perhaps as slightly greying hair or deep bags under the afflicted individual’s eyes. However, as the curse takes hold, these changes deepen and become more severe.

Most healers are powerless to slow, hinder or reverse the progression of their patient’s Gloamhold Look. Only powerful magic beyond the reach of all but the richest or most powerful folk, or time spent away from Gloamhold’s gloomy precincts, can loosen the curse’s persistent grasp.

Generally, Gloamhold’s curse may fall upon an unfortunate explorer, when one of the following occurs while the character is in Gloamhold:

Additionally, certain places are so steeped in ancient evil, that the curse is particularly virulent in such locations. Simply entering such areas could be enough to trigger the onset—or the worsening—of the curse. Such locations—and their effects—are at the GM’s discretion, but should include any place dedicated to Dagon’s worship.

Designing this facet of Gloamhold has proven particularly tricky. Given that Gloamhold is being written as a system neutral product, designing the mechanical aspect of how characters suffer the taint of the dungeon was difficult to achieve. I’ve realised that any talk of saving throws or the like would be impossible to deal with in all but the vaguest terms—thus rendering the process basically pointless. Instead, I think it makes more sense to have certain events trigger its onset. The GM shouldn’t immediately describe the curse attacking the PC—it’s a more subtle effect than that which will take a day or two to manifest.

9 Comments Share Tweet Print Email
Categories: 5e, Gloamhold, Pathfinder, Raging Swan Press
Disclosure of Material Connection: Some of the links in the post above are “affiliate links.” This means if you click on the link and purchase the item, I will receive an affiliate commission. Regardless, I only recommend products or services I use personally and believe will add value to my readers. I am disclosing this in accordance with the Federal Trade Commission’s 16 CFR, Part 255: “Guides Concerning the Use of Endorsements and Testimonials in Advertising.”

9 thoughts on “The Gloamhold Look”