I’ve previously blogged about 4 Overlooked TSR Modules You Should Run. One of those adventures is the excellent B5 Horror on the Hill. 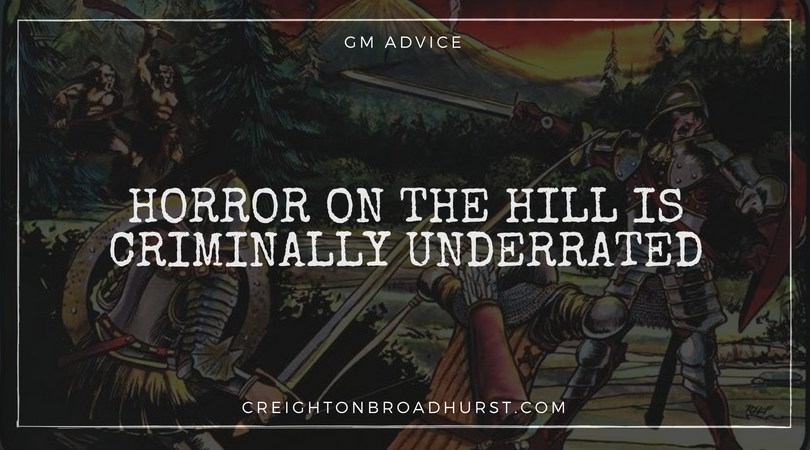 I have many, many happy memories of running this module. In fact, I think it is almost as good as B2 Keep on the Borderlands. I’ve always been surprised the module doesn’t feature in more “good design” and “good adventure” style posts and articles. It didn’t even make Paizo’s Top 30 in Dungeon 116. In my opinion, it’s a spectacular example of a well designed low-level dungeon. (It’s not perfect, though, as I’ll discuss below).

Horror on the Hill has been on my mind a lot recently as I begin to plot my next standalone adventure for Raging Swan Press. Previously, when I wrote Shadowed Keep on the Borderland I took a tremendous amount of inspiration from the Moathouse (perhaps a perfect low-level adventure) from T1 Village Of Hommlet.

This time, Horror on the Hill is up for dissection. As always, before putting serious thought into actual design, I wanted to dive into the source material to understand why I love the module so much.

Douglas Niles (the designer) packs an epic amount of material into the module’s 32 pages. Putting aside the introduction text, three new monsters and so on we get a large wilderness “level”, the ruined monastery’s ruined upper level and three dungeon levels; in all—101 encounter areas. You could run this module for months.

Each level features different kinds of foes and challenges. The wilderness—obviously—features lots of animals and suchlike (and as I’ve said before all good dungeons need a wilderness). You can also–obviously–get lost!

The ruined monastery level and the first dungeon level feature undead as well as goblins and hobgoblins along with their servants, slaves and allies.

The second dungeon level—natural caverns—are a confused maze hosting a mix of creatures who have become trapped in the level.

The final level also comprises natural caverns, but here a red dragon holds sway over its kobold minions. There is but one way out—passed the red dragon!

Generally speaking, for the first two levels of the adventure, the PCs are in control; they can pick and choose when and where to strike. However, if they get trapped in the second level, that changes. From this point onwards, they cannot go back. They must go forward, with the resources they have on hand. (See, I told you resource management was cool). The whole tenor of the module changes.

A good dungeon doesn’t just exist in stasis waiting for adventures to come and kill everything living in it (except, perhaps, for certain ancient tombs and barrow mounds). For example, in location 51, the PCs come across a party of dead adventurers still protected by their trained wolves. This encounter is also cool, as the PCs might be able to add two trained wolves to the party! (And who doesn’t want that?)

It’s Not Perfect, Though

Horror on the Hill its good, but it’s not perfect. Several things don’t work for me. These include:

Mysterious Spellcasters: A “small cottage”, although not all is as it seems, lies in the woods. Two powerful spellcasters—kindly little old ladies—live in the cottage filled with treasure that disintegrates if stolen. I’m paraphrasing, but essentially it sucks. It’s my least favourite bit of the whole module and I tend to ignore it as I think it kills the mood.

Odd Verisimilitude: I love verisimilitude. I live and breathe it whenever I can. I love how a lot of the monsters and challenges make sense in regards to the location in which they appear. I’m not a huge fan of the presence of neanderthals in various locations in the module. I know this makes no sense when you consider the many fantastical creatures that do appear in the module but what can you do? It think—for me—they are too “real world”.

No Home Base: One of the great things about Keep on the Borderland is—obviously—the keep. While Horror on the Hill has Guido’s Fort the details of said fort are charitably described as scanty. I would have loved a handful of pages devoted to the PCs’ base.

Do you love Horror on the Hill? Do you hate it? Let me know why, in the comments below.

12 Comments Share Tweet Print Email
Categories: Creighton, Freelance Advice, Gaming Advice, GM Advice, Pathfinder Advice
Disclosure of Material Connection: Some of the links in the post above are “affiliate links.” This means if you click on the link and purchase the item, I will receive an affiliate commission. Regardless, I only recommend products or services I use personally and believe will add value to my readers. I am disclosing this in accordance with the Federal Trade Commission’s 16 CFR, Part 255: “Guides Concerning the Use of Endorsements and Testimonials in Advertising.”