Encumbrance. Surely, no single phrase (except possibly, “I initiate a grapple”) illicits so much terror and confusion among gamers. 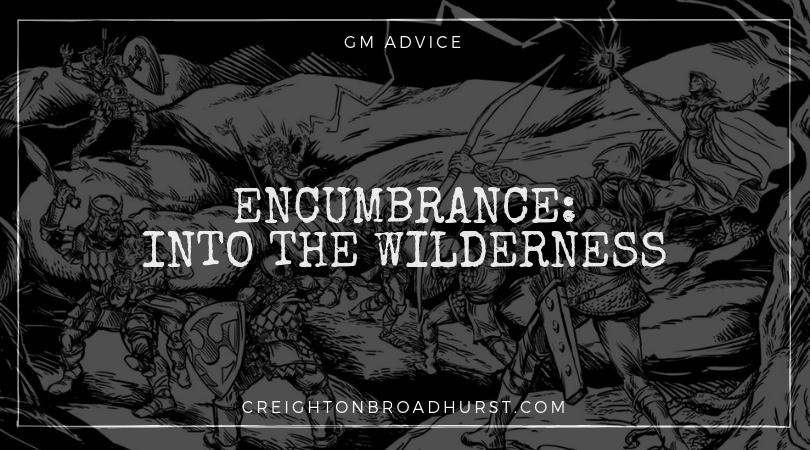 I recently posted an article entitled the Fallacy of the Adventurer’s Backpack, after my very own (tremendously short) adventure on Dartmoor. Loads of people read the article, and even more interestingly several soldiers chimed in with list of that they carried while on operations. The amount of kit is incredible and could weigh up to 100 lbs.!

However, even these super-fit individuals wouldn’t actually fight while carrying and wearing all this kit, if they could help it. Instead, they’d dump their packs before going into action.

In a series of related pondering I was chatting with some friends last week over a rather marvellous full English breakfast about encumbrance and how it related to the Kingmaker adventure path we played the best part of five years ago. During that campaign, the party would regularly plunge into the wilderness for weeks at a time with only what they could carry in their trusty—and it turns out unfeasibly stuffed—backpacks.

Generally speaking, getting about in the wilderness is slow going and the adventurer must carry a tremendous amount of gear. It got me thinking about what the average adventurer might need for a week in the wilderness, beyond his normal adventuring gear. Such a basic equipment list could include (but is not limited to):

Obviously, the specifics of the adventure might dictate adding other things to the list (for example, lots of rope in the mountains, cold weather gear in the artic and so on). In any event, without magical assistance such as a bag of holding or suchlike this amount of equipment is heavy and bulky. And there’s no way it would all fit in a backpack.

Instead, the PC might elect to buy a pack horse or donkey to carry all this equipment; he might even engage a hireling (who he may also have to equip) to manage the pack horse, help about camp and so on. He might also buy a horse for himself (and possibly even for this hireling) which necessitates other equipment including bits, bridles, saddlebags etc. If he buys a warhorse, he’ll probably also pick up some barding.

Now, of course, you might find the minutia of this kind of resource management boring. I love resource management for two good reasons, but you might think it distracts from the essential business of whacking orcs. That’s cool—and your prerogative—but personally I like my adventurers rooted in “reality”.

For me, it adds to the play experience. It acts as a subtle highlight of the party’s situation and surrounding environment. It also adds an extra dimension of cool challenge to proceedings that doesn’t feature in a game where such “boring” minutia as food, water, light sources and ammunition are hand-waved. Do the party have enough time to explore the dungeon and get home? Are they fighting against the clock as well as the dungeon’s denizens? Should the archer save some arrows for later or fire as many as possible as quickly as possible? (Something my son struggles with in my Shattered Star campaign).

Another outcome of focusing on these kind of details is that it means the PCs have less money (particularly at low-levels) to spend on their latest shiny toys. Consequently, they might be forced—the horror—to rely on their wits and skills as players to overcome challenges (instead off just whacking them with a sword or blowing them up).

While he was talking about taxation (more on this exciting topic another time) I think it also holds true with equipment. And I’m unsure how Gary Gygax could be wrong!

Is this a colossal waste of time? Do you love this facet of the game? Let me know, in the comments below.

6 Comments Share Tweet Print Email
Categories: Gaming Advice, Pathfinder, Player Advice
Disclosure of Material Connection: Some of the links in the post above are “affiliate links.” This means if you click on the link and purchase the item, I will receive an affiliate commission. Regardless, I only recommend products or services I use personally and believe will add value to my readers. I am disclosing this in accordance with the Federal Trade Commission’s 16 CFR, Part 255: “Guides Concerning the Use of Endorsements and Testimonials in Advertising.”

6 thoughts on “Encumbrance: Into the Wilderness”