Creating a new character is exciting—limitless possibilities lie before you (unless your stat rolling abilities equal mine). However, it can also be a daunting experience. There is so much to do: mechanics, appearance, personality, the hell of mundane equipment, encumbrance and more. 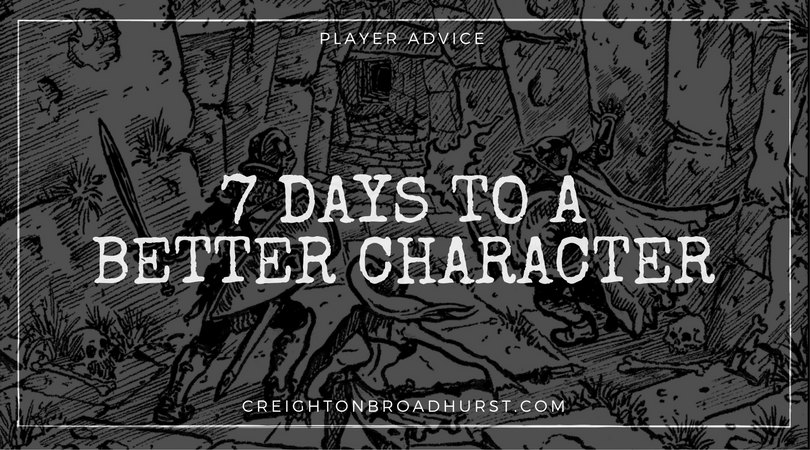 Inevitably, it won’t all get done in time for the game. It seems like there’s just too much to do. However, when you think about it, a GM does far more between sessions than make a character. Making a character before the next session should be a doddle. However, it never seems to pan out that way.

Luckily, though, there is a way to create a new fully rounded character before the next game. And it’s not that hard to do.

The character generation session is one of the most important sessions in a campaign. In this “Session 0” the players come together, learn about the campaign and its themes and (hopefully) agree on a relatively balanced mix of characters that everyone wants to play.

Luckily, few groups play more frequently than once a week. This gives the diligent, organised player time to create a fully rounded character. In my home game, we play weekly. Thus, the title of this article: 7 Days to a Better Character.

The process below break down designing a PC into seven distinct steps. (Breaking a task down into smaller steps makes it less daunting and easier to achieve). When moving through the process, keep in mind:

Day 1 is likely Session 0 of the campaign (unless you are sadly replacing a fallen adventurer).

For many of us, the mechanics of a character are its most important aspects. We can spend days or weeks focusing (or perhaps obsessing) over which feats, archetypes and skills to chose, and that’s after agonising over which race and class to pick in the first place. (As an aside, this is part of the reason why I like to keep things simple and only use the Pathfinder Core Rulebook. )

However, as most tasks expand to fill the time allotted to them, it’s not the greatest idea in the world to spend an entire week on this part of character development. A decent rounded character is much more than the sum of its modifiers and abilities.

When you have a first mechanical draft, send a copy of the sheet to your GM for review. Keep in mind, this probably isn’t the final version of your character but this draft at least gives the GM a heads up as to the direction you are moving. It also allows the GM to flag up any feats, classes, spells and so on he thinks are broken. It’s much better—and far less disruptive—to find this out now rather than when you sit down to play.

Depending on the system you play and the game’s style you might also need to think about encumbrance.

Things to consider here include your character’s build, hair style, choice of clothes, appearance of equipment (old, battered, new and so on) and more. Also consider giving your character a distinctive feature or two to help him stand out. Is he scarred? Does he have a birthmark? All these things add depth to your character.

Perhaps most important to how your portray your character is his personality. Most players normally have a vague idea of their character’s personality, but often this encompasses alignment, patron deity and little else. However, personality is so much more than that! At the very least, consider:

A wise and clever GM will provide opportunities for you to use these skills. True, you probably won’t defeat the Ancient Lurking Darkness with Profession (woodworker) but you might be able to help a peasant repair his wagon which is turn makes him your friend. He might then introduce you to someone who knows the local wizard who just happens to have a few scrolls for sale…and so on.

To know where your character is going, it’s a good idea to know where he has been. Your background—like every element of your character—can be as detailed or vague as you like. You don’t have to map out every minor event in his life, but having an idea about the broad strokes of his background is a good idea. At the least, consider:

This is really part of #5 above, but its potential impact on the game means it’s worth some particular effort on your part. Unless you want you background to have no effect on the game, it’s worth designing some GM-friendly hooks into your background. Consider, for example:

Such hooks let the GM design encounters or even entire adventures that could have specific significance for your PC. That’s way cool.

On the last day, it’s time to pull together all the extraneous materials you might need to run the character effectively and quickly. (No-one enjoys watching you look up a spell or ability for the umpteenth time because you can’t remember how it works).

Use this day to bookmark or copy any particularly problematical feats, spells or abilities your PC has so your won’t slow down game play. While this isn’t exactly an exciting task, it pays dividends at the game table. Less wasted time equals more gaming fun!

Also make sure you’ve got the right physical equipment to play your character. As an extreme example, if you are playing a 10th-level wizard who can cast fireball it’s probably a good idea to turn up to the game with more than one six-sided die.

Finally, send your GM a final copy of your character along with all its background notes and so on. A decent GM will want to get to know your character and its motivations. The more a GM knows about your character the more he can trailor the adventure’s or campaign’s challenges to suit. (And if you forget or lose your character sheet, all is not lost!)

As always, adjust and modify this process to better suit your game and players. You know your game far better than I so view this article as a starting point on your quest to have better—however you want to define better—characters at your table!

Does this process work for you? Is it a waste of time? Let me know, in the comments below.

5 Comments Share Tweet Print Email
Categories: Gaming Advice, Pathfinder Advice, Player Advice
Disclosure of Material Connection: Some of the links in the post above are “affiliate links.” This means if you click on the link and purchase the item, I will receive an affiliate commission. Regardless, I only recommend products or services I use personally and believe will add value to my readers. I am disclosing this in accordance with the Federal Trade Commission’s 16 CFR, Part 255: “Guides Concerning the Use of Endorsements and Testimonials in Advertising.”

5 thoughts on “7 Days to a Better Character”