I love gaming, and I love GMing. GMing, sadly, is a time-consuming hobby. Beyond actually running game night, GMing requires a decent amount of preparation. Sometimes getting ready for the game can take longer than the session itself! That’s not ideal as, like you I expect, I’m a busy chap. Luckily, I’ve recently been testing a new plan to crush my GM prep woes and make my campaign more awesome. 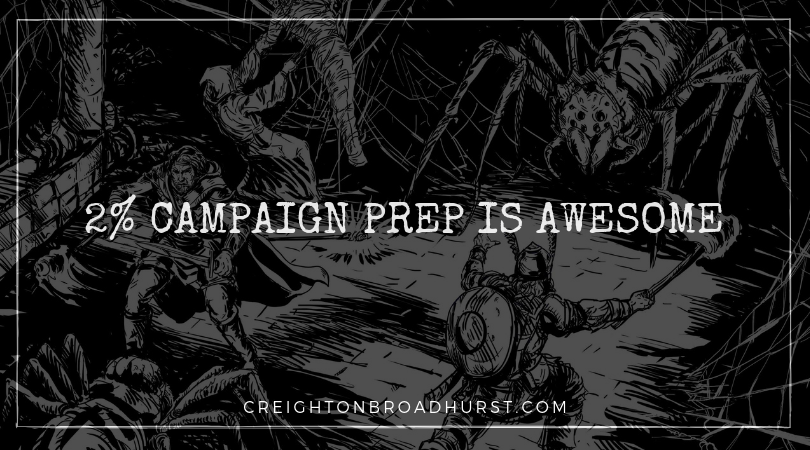 During previous campaigns, I’ve always scheduled campaign prep for Monday night. I’d try to sit down and spend a couple of hours getting ready for game night. Inevitably, I’d fail to get as much done as I’d like. Sometimes, I wouldn’t even get started—family and/or work often muscling into my prep time. Clearly, that tactic wasn’t exactly a storming success.

Coupled with this, my new campaign—Adventures in Shadow—is a megadungeon sandbox affair set in Gloamhold’s benighted depths and the surrounding Duchy of Ashlar. The players can literally go anywhere, and I must be ready for almost anything. Clearly, my old way of campaign prep wasn’t going to work. I needed to do something different, or the campaign would die in a morass of half-arsed, ill-thought out encounters, generic cobbled-together adventures and cancelled sessions.

I recently blogged about how I have discovered the terrifying power of “little, but often.” As you might recall, I’ve started writing 500 design words every weekday in my quest to write 131,000 design words by the end of 2019. It turns out for me carving out about 30 minutes every weekday to write is relatively simple. This approach also keeps you fresh as there are no all-day design slogs to get through. At the time of writing (early May 2019) I’ve already crushed my yearly target and written 133,497 design words! Clearly—for me—the tactic works.

With this in mind, I’ve decided to employ a similar (deadly) weapon in my ongoing battle to be prepared for game night. However, instead of shooting for a certain daily word count I’m scheduling 30 minutes every weekday to work on my campaign. (That’s roughly 2% of the day). In my bullet journal, I have it listed as “Campaign 30”.

I’m not shooting for a certain daily word count, as designing and running a campaign requires diverse work. Maps must be prepared (badly, in my case), character notes maintained, plots plotted, strange creatures such as zombie mimics created and so on. Focusing on time instead of mere word count gives me the flexibility to work on what needs attention.

Spending 30 minutes a day on my campaign means I rack up 150 minutes a week (or two and a half hours) of prep. time. I find that’s pretty doable, and if I manage to carve out time at the weekend, my total goes up a whole hour (behold, my maths).

The other handy thing about “little, but often” is that if I happen to miss one Campaign 30, it’s not a complete disaster in the same way as failing to do any prep that week.

I randomly picked 30 minutes as my daily target, but you could choose any length of time. For example, 15 minutes is roughly 1% of the day. If you love GMing, it should be relatively easy to carve out 1% of the day to work on something you enjoy.

If you are struggling to get ready for your game, I highly recommend you have a crack at implementing a similar system. Pick an amount of time you can commit to daily and go for it!

Is this madness? Do you do something similar? Let me know, in the comments below.

14 thoughts on “2% Campaign Prep is Awesome”